Because all Christian groups believe they were ultimately founded by Jesus Christ, all who wish to be considered legitimate need to explain why they did not exist prior to their (actual) founding date. The gap is usually explained by what I call an “apostasy narrative.” An Christian apostasy narrative is a tale of how the Church fell away from the truth at some point (usually immediately or during the reign of Constantine), and either disappeared entirely (requiring restoration) or was reduced to a hidden remnant of true believers absent from history but somehow surviving (requiring reformation). These apostasy narratives are used to justify the restoration/reformation of the Church at whatever date a given group began.

For the Mormons (the Church of Jesus Christ of Latter-day Saints), this apostasy narrative is the very foundation of their 19th century movement. Their founder, Joseph Smith Jr., allegedly restored the true Gospel after asking God which church (i.e., Protestant denomination) he should join. God reportedly replied that Smith was to “join none of them, for they were all wrong; and . . .  all their creeds were an abomination in his sight; that those professors were all corrupt” (Joseph Smith History, 1:19). This was all due to the “Great Apostasy” which was supposed to have swept through the Church upon the death of the last apostle and ruined Christendom for 1,800 years – and which Smith was to restore in those “Latter Days.” Both the Jehovah’s Witnesses and the Seventh-day Adventists are 19th century apocalyptic sects which also rely on (primarily anti-Catholic) apostasy narratives. Likewise, the Church of God of Prophecy was started when its founder prayed to God and was told to restore the true Church (here is an interesting testimony on how this very claim drove someone into Catholicism). Baptists have a unique apostasy narrative known as the Trail of Blood wherein it is claimed that the true Church has always been Baptist, but because of persecution by the established Church, they remained in hiding prior to their public arrival in the 17th century (apparently contra Mt. 5:14).

The inconvenient fact is that there simply was no “The Apostasy.” The theory of an early total (or near total) apostasy is not grounded byany non-question-begging historical evidence. The version that begins with the death of the last apostle is riddled with holes (see Was There a Great Apostasy?), and the version where the Church remained pure until the time of Constantine is likewise miostly urban legend and conspiracy theory (see Four Witnesses brought Me Home).

Besides being bad history, neither the Christian Scriptures nor Church history can be used to ground such an accusation against the historic Church. Indeed, both are contrary to it. 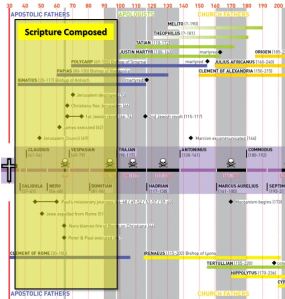 In another example, 2 Thessalonians 2:1-3 indicates some future falling away. It could have been immediately or it could have been 1,000,000 years in the future. What is worse for these groups here is the solution that Paul gives just a few verses later: “stand fast, and hold the traditions which ye have been taught, whether by word, or our epistle.” So it is the tradition of the Church that safeguards believers against apostasy – but these groups would have us believe that this tradition died with the apostles (or a few centuries later – even before the biblical canon was settled).

When Jesus founded the Church, he said “the gates of Hades will not overcome it” (Mt. 16:18). Jesus prayed that Peter would not fail (Lk. 22:32), so unless Jesus failed his own test for wisdom (Mt. 7:24-27), his Church cannot have gone into apostasy nor disappeared from the earth. The purpose, and thus nature, of the Church Jesus founded is one of faith in the truth of the gospel. Jesus commanded the apostles to take all the truth to the entire world and that he would be with them to the end of the age (Mt. 28:20 cf. Jn. 14:16).  Paul records that this gospel went to the ends of the earth (Col. 1:23 cf. Rom. 1:8) and Jude mentions the faith had been delivered to “all the saints” (Jude 1:3). Thus can Paul call the Church the “pillar and foundation of truth” (1 Tim. 3:15). The apostle Paul says Christ’s kingdom cannot be shaken (Heb. 12:28). Thus, the Church that existed after the time of the apostles cannot have gone into apostasy nor disappeared from the earth.

Finally, although these groups eschew any authoritative claims of the historic Church, they are indirectly beholden to it because the Bible itself is a product of the Church. Jesus did not leave behind any writings, he left behind  authorities who wrote the New Testament. The Christian Church, then, existed before the Christian scriptures did. Moreover, it was the Church who, centuries later (N.B., after the time of Constantine!), determined the biblical canon. Thus, trusting in the religious authority of any given New Testament book is ultimately trust in the authority of the Church that included it.

Contrary to the imagination of many, there is an unbroken history of Christian teaching that lasted from (and even partially overlapped) the time of Jesus’ original apostles to today. The last living apostle, John, is thought to have died in the early 2nd Century (his last epistle, Revelation, was probably written in A.D. 98). The writings of Clement of Rome (a disciple of Peter) are dated to A.D. 95 or 96, and clearly contradict Mormon teachings (e.g.,  monotheism and apostolic succession). Ignatius of Antioch wrote on his long journey to his martyrdom sometime between A.D. 98 and 117. He famously commanded Christians to, “Follow, all of you, the bishop, as Jesus Christ followed the Father; and follow the presbytery as the Apostles. . . Wherever the bishop appears, there let the people be, even as wheresoever Christ Jesus is, there is the catholic church. It is not lawful apart from the bishop either to baptize or to hold a love-feast [/Eucharist]” (To the Smyrnaeans, VIII). Both of these men lived during the time of the apostle John and could have written before his death.

The Church Fathers continued writing after these, including Polycarp who was John’s disciple, and Irenaeus who was Polycarp’s student. When Irenaeus faced the Gnostic heretics in the second century, he listed the succession of bishops in Rome to combat their claim that the Gnostic teaching was in line with the historical Church (Against Heresies, 3.3). Thus, we have a truly unbroken chain of orthodox Church leaders handpicked by the apostles to carry on their teachings that extends well beyond the time frame required by most groups to justify their existence – for without such an apostasy of the Church, there can be no restoration of the Church. The justification for one of these groups’ existence basically boils down to “The early Church did not teach what we teach.”