One thing that saints like Athanasius, Augustine, and Aquinas all have in common is that they asserted that man can become God.

This teaching is also reflected in the Catechism of the Catholic Church:

Both Saints Irenaeus in the West and Maximus in the East made similar assertions (in fact, they are who the Catechism cites).

How is this teaching not heretical (or completely insane)?

Of God and Man

The idea that man can “become god” has been called Theosis, Deification, or Divinization – and it actually has a solid pedigree among orthodox theologians, apologists, fathers, doctors, and saints of the Church.

But let’s back up.

So, if quotes from Church fathers, doctors, saints, popes, etc. are found that seem to indicate otherwise, they are not being understood correctly. If this is the case, though, why are these weird quotes to be found at all (much less with such proliferation)? The answer is that Scripture also teaches that man can become God[like].

“You may escape from the corruption that is in the world because of passion, and become partakers of the divine nature“ (2 Pet. 1:4)

“Beloved, we are God’s children now; it does not yet appear what we shall be, but we know that when he appears we shall be like him“ (1 Jn. 3:2)

“Know the love of Christ which surpasses knowledge, that you may be filled with all the fullness of God” (Eph. 3:19)

But what does that mean?

While it is easy to compile quotes from various writers that “clearly” state that man can become God, there is always a theological context that must be kept in mind. This is not always easy, because the qualifications necessary to correctly understand these teachings are not always spelled out in every single sentence (although they often are).

The guiding principle concerning to these sorts of statements is that when divinity is predicated of humanity, it is according to participation in grace, not to generation by nature. In other words, “divinity” in these cases does not refer to a change in what something is, but rather what it is like. For example, when we participate in the Eucharist, we “become the body of Christ” (see 1 Cor. 10:16-17) –  but we do not become the divine savior of the world!

St. Augustine makes this all-important distinction clear when he says,

He has called men gods, that are deified of His Grace, not born of His Substance. For He does justify, who is just through His own self, and not of another; and He does deify who is God through Himself, not by the partaking of another. But He that justifies does Himself deify, in that by justifying He does make sons of God. For He has given them power to become the sons of God. John 1:12 If we have been made sons of God, we have also been made gods: but this is the effect of Grace adopting, not of nature generating. For the only Son of God, God, and one God with the Father, Our Lord and Saviour Jesus Christ, was in the beginning the Word, and the Word with God, the Word God. The rest that are made gods, are made by His own Grace, are not born of His Substance, that they should be the same as He, but that by favour they should come to Him, and be fellow-heirs with Christ” (Exposition on Psalm 50, 2)

St. Thomas Aquinas is helpful here as well, because he more regularly states his qualifications clearly. Note that in the quotes below, the highlighted statements sound quite “clear” until clarifying terms such as “sharers in” or “participation in” are added into the equation.

Throughout his writings, Aquinas is adamant that the ontological distance between God and man (or any creature) is so far (namely, infinite!) that the two cannot even be compared on the same scale. God is so utterly “other” than mankind that human knowledge cannot reach God’s essence – and our language cannot positively communicate God’s essence.

Aquinas’s language concerning deification, then, must be understood in accordance with this position. Thus, when he explicates his theology of deification, he says things such as this:

But the Son did not love the disciples in either of these ways. For he did not love them to the point of their being gods by nature, nor to the point that they would be united to God so as to form one person with him. But he did love them up to a similar point: he loved them to the extent that they would be gods by their participation in grace ‑ “I say, ‘You are gods'” (Ps 82:6); “He has granted to us precious and very great promises, that through these you may become partakers of the divine nature” (2 Pet 1:4) ‑ and he loved them to the extent that they would be united to God in affection: “He who is united to the Lord becomes one spirit with him” (1 Cor 6:17); “For those whom he foreknew he also predestined to be conformed to the image of his Son” (Rom 8:29). Thus the Father communicated to the Son a greater good, with respect to each nature of the Son, than the Son did to his disciples; yet there is a similarity, as was said. (Commentary on the Gospel of John, 1999)

Saints Augustine and Aquinas are the heaviest of the theological heavyweights in the Church. Their theological qualifications concerning statements of deification can be generalized over similar statements of orthodox theologians, apologists, doctors, and saints of the Church even when they do not indicate it in every particular statement. (Note: even when this distinction is not stated plainly, it is most often implied by terms such as “of” or “with” that can be easily glossed over if one is not looking for them.)

This whole idea of participation in God’s nature might still sound like a theological cop-out. Is this distinction real, or is it just some semantical ploy to get otherwise-orthodox theologians out of trouble when they make what seem to be heretical claims about God and man?

The distinction between participation in grace and generation by nature is real. It is the critical piece to understand what these orthodox theologians are saying – one that, if missed or misunderstood, can lead to the kind of metaphysical lunacy one finds in Mormonism or the Word Faith movement.

St. John of Damascus speaks of being our “inflamed and deified by the participation in the divine fire.” Fire, as it turns out, makes for a good analogy for participation (see also Aquinas ST I-II, q. 112, a. 1). So, consider a frying pan being heated over a fire. When the pan is put into contact with fire, it participates in the fire’s heat (i.e., it becomes hot).

The heat of the fire is what it is by nature (the fire is heat). The heat of the pan is that which it has by participation (the pan has heat).  When fire heats the pan, heat can be said to be part of what the pan “is” – but both the fire and the pan remain unchanged according to their natures. The pan “becomes heat” but it never becomes fire. Even though the pan participates in the nature of fire (heat), the pan remains a pan. The pan’s nature never changes even though it becomes fire-like.

The formula for this analogy is found in the ratio between the two natures and their relationship to a single attribute. The fire is to its heat as the pan is to its heat. And since the same heat is caused by the fire in both cases, there is a close participation involved. 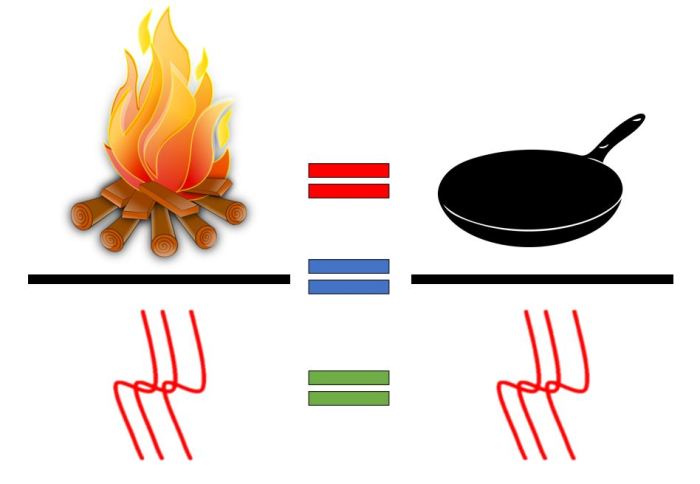 Participation also implies difference. Because natures do not become identical, their attributes will always have to be understood accordingly. God’s attributes are not only quantitatively greater than man’s, they are also qualitatively different. God does not simply have more power than man, God’s power is of a wholly different kind. The same goes for God’s presence, knowledge, love, goodness, etc.

Some of these attributes are fairly obvious. We could never attain to God’s power, for example – for then we could challenge God’s activity. God’s presence is also very unlike man’s, because God’s infinite essence is not located (which implies limitation) anywhere and yet God is everywhere. So to say than God is present at church is not the same thing as saying a man is present at church.

Other attributes are more difficult to distinguish properly. Take, for example, God’s knowledge. God “knows” and man “knows” – but to say that God “knows” and man “knows” is not to predicate the same thing of God and man. The reason we can use the same word (“knows”) in both sentences is because of analogy: God is to His knowledge as man is to his knowledge. But this no more equates God’s knowledge and man’s knowledge than it does God’s nature and man’s nature. Thus, even if a man were to know all things, he would not be omniscient in the way God is. God knows all things as their creator – their first cause. This gives God a kind of knowledge man will never have, even if man can learn all facts.

If salvation issued in the replacement man’s nature, it would not be salvation but the destruction of one thing and the creation of another thing. Rather, in saving mankind, God’s grace does not destroy nature but perfects it – but even a perfected human nature is still limited to being what it is. Man’s limited nature may be expanded, but it will always remain finite – and the distance between finite and infinite is so great that it is not a difference so much as a complete distinction. The same will always be true of God and man.

In the same way that we can say (accurately, but only analogically), that the pan can “become” fire, we can say that man can “become” God. God is absolutely unique and the infinite chasm between the Creator and the creature can never be crossed. It is clear from the writings of those who make such statements that no orthodox theologian is confused on this point, and such statements need to be read with the above distinctions in mind.

Our aim, then, should not simply be human sainthood – but human godliness.

“If anyone desire in this way to be Godlike, he commits no sin; provided that he desires such likeness in proper order, that is to say, that he may obtain it of God. But he would sin were he to desire to be like unto God even in the right way, as of his own, and not of God’s power.” (Thomas Aquinas, ST I. Q.63, A.3)