Douglas Beaumont earned a Ph.D. in theology from North-West University and an M.A. in apologetics from Southern Evangelical Seminary, where he taught for several years before coming into full communion with the Catholic Church. He has since appeared on The Journey Home and Catholic Answers Live, and has been interviewed by The National Catholic Register, EWTN, Relevant Radio, and The Patrick Coffin Show. He is the author of books such as With One Accord, Evangelical Exodus, and The Message Behind the Movie, and has contributed to Mind, Heart, and Soul: Intellectuals and the Path to Rome, Bumper Sticker Catholicism, The Best Catholic Writing, and The Apologetics Study Bible for Students, and has written for Catholic Answers Magazine, The National Catholic Register, and Catholic World Report. He can be found online at douglasbeaumont.com.

Doug is available for teaching and speaking on a range of topics concerning Christian theology, apologetics, philosophy of religion, catechetical ministry, and media. He has spoken coast to coast and always receives great feedback. 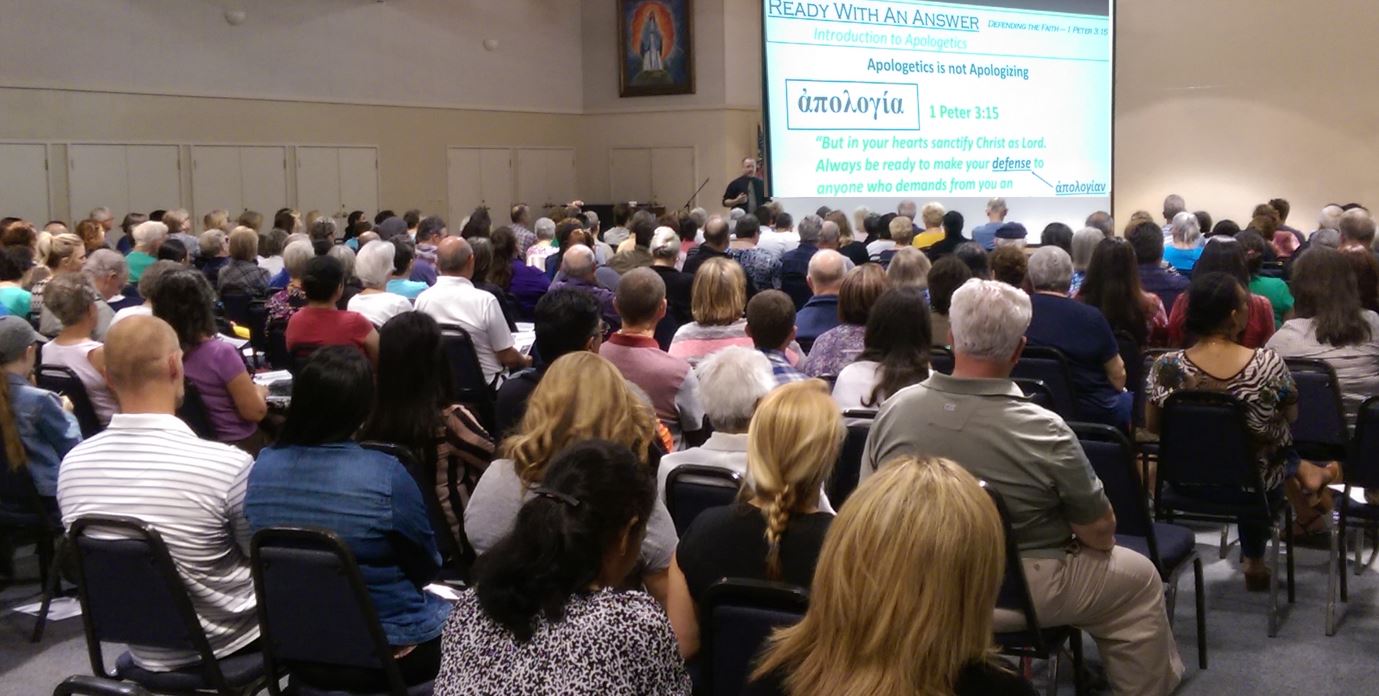 Doug explains how a denial of universal truth actually affirms universal truth, and how relativism can be successfully disproven by simply applying it to itself.

Answering Skepticism: What is Truth?

Pilate famously asked, “What is truth?” (Jn. 18:38) In this talk, Doug goes through various views of truth and shows how only one can truly claim the title.

Answering Indifferentism: Can All Faiths Save?

The Church teaches as dogma that God’s existence can be known apart from divine revelation. How can this be so? In this talk, Doug gives several historically important arguments that God exists.

Answering Atheism 2: Can God Exist? (Responding to Arguments Against God)

Based on his doctoral dissertation, Doug discusses the most difficult philosophical arguments against God’s existence, how they have been (unsuccessfully) answered in the past, and how best to deal with them today.

Answering Atheism 3: The Problem of Evil

Thomas Aquinas listed the Problem of Evil as the most difficult of questions regarding the existence of an all-powerful, all-good God. How should Catholics approach the issue? Doug gives his take on this thorny problem.

With so many religions claiming to hold the truth, how could anyone possibly investigate them all in order to arrive at the best possibility? In this talk, Doug argues that there is only one way – and only one religion really fits the bill.

Miracles are God’s means for verifying His messages – and the greatest of them all is the Resurrection of Jesus Christ. But is this event a mere object of faith – or can it be proven historically? Here, Doug explains the scholarly consensus on this issue.

The battle cry of the Reformation was “Faith alone!” over against the Catholic teaching that justification is not by faith alone. Although quoting James 2:24 is a good start, Protestants must be answered with more finesse, and Doug goes into the details here.

Protestants often claim that their faith is based on the Bible alone and that Catholics must add the “traditions of men” to Scripture in order to support the Church’s teachings. Doug shows here that if Church tradition is really a problem, then Protestants have an even more difficult version of the same problem.

Answering Non-Catholic Christians 1: Was There a Great Apostasy?

Behind every non-Catholic claim to be “true Christianity” is some kind of apostasy narrative – a tale of how the original Church slid into error only to be rescued / reformed / restored centuries later. Is this claim historically accurate? Doug explains the answer here.

If the Bible has no examples of infant baptism, why does the Catholic Church (and Orthodox, and many Protestant denominations) practice it? Here, Doug explains the biblical, traditional, and theological evidence for baptizing babies.

The nature of Communion is a hotly disputed subject among Christians. In this talk, Doug explains the Church’s view and how it is rooted in Scripture, history, and philosophy.

Answering Jehovah’s Witnesses – Is the Watchtower a True Prophet?

How should Catholics respond when the most aggressive anti-Catholic cults in America knocks on their door? Attempting to beat them at their own game is rarely successful, and they’ve been trained to deal with numerous objections. In this talk, Doug explains how to show Jehovah’s Witnesses the falsehood of their prophetic authority using their own materials.

Mormon missionaries are trained in special schools to argue for their belief in their prophet Joseph Smith Jr. and against the false “Christendom” represented by the Catholic Church. Given their numerous scriptural texts and bizarre array of ever-changing teachings, how can a Catholic respond? Here, Doug shows how to narrow in on the most important issues and cut through Mormon rhetoric.

Evangelical Exodus: Why I Became Catholic

Based on Doug’s book Evangelical Exodus: Evangelical Seminarians and Their Paths to Rome (Ignatius), here he explains the primary motivations that led he and others out of the Evangelical world and into the Catholic Church.

Proven Catholic: Proving Catholicism from the Ground Up

This talk shows that there are really only a few issues that must be settled to prove that Catholicism is true. Fortunately, these have strong philosophical, scientific, historical, and theological support.

Religious Conversion: Your Place in the Process

Religious conversion (and de-conversion) is not a uniform, linear process – it is made up of discrete stages that can look very different (and are often confused). This talk explains the process of conversion and what you can do at each stage.

Based on the book With One Accord, this shows how Catholic beliefs can often be understood better by Protestants when the principles behind them are revealed to be those already held by many Protestants (whether they know it or not).

The Message Behind the Movie: Engaging Film without Disengaging Faith

Based on his book of the same title, this talk walks listeners through the basics of script structure in order to show how to accurately and objectively understand a movie’s message and then respond to relevant themes from a Christian perspective.

Confirmation is often known as the “Sacrament of Graduation” because so many teens leave the Church after its reception. Based on cutting edge research, Doug presents solutions to this crisis.

Mass Effect: The Importance of Attending Mass as a Family

Attending mass with the whole family is often a challenge – but research shows that it is a key factor in faith retention among modern generations. Doug explains why in this talk geared toward Confirmation parental retreats.

As more and more young people leave their faith behind, a re-focusing of catechetical energy seems in order. In this talk, Doug discusses the research behind disaffiliation and how a parental catechetical program can help reverse the trend.

What is the Bible All About?

An overview of the Bible from its creation to its contents.

How Not to Study Your Bible

The book of Daniel is a treasure trove of prophecy that is at the same time often difficult to understand. In this talk, Doug goes through the visions and dreams, linking them together into a coherent prophetic history.

Doug presents Jesus’ life and ministry in a chronological fashion that harmonizes the gospel accounts in a manner that helps us to better understand Jesus’ teachings.

Doug presents St. Paul’s life and ministry in a chronological fashion that harmonizes he book of Acts, the Epistles, and Christian history in a way that sheds light on St. Paul’s teachings.

Revelation: Many Views of One Story

Will the world end soon? Is there going to be a “rapture”? So much confusion surrounds the teachings of the “End Times” that it is difficult to believe there is a way through it. In answer to this problem, Doug goes through the various options and presents a uniquely Catholic view that you won’t hear on Christian TV or popular end time novels.

Must Catholics check their brains at the door when entering the Church? NO WAY! In this talk, Doug discusses the true nature of faith and reason, showing that one can be a faithful and reasonable person at the same time as being a committed Catholic.

What is sin and how are we saved from it? Catholics do not always have as easy a time articulating the Church’s answer as their Evangelical counterparts, but the gospel message is the most important one we can share! Here, Doug walks through the gospel message as taught by the Church.

The Trinity (and Heresies)

How can God be one and three at the same time? Isn’t this irrational? In this talk, Doug goes over the correct understanding of the trinity and compares it to popular mistakes that could land one in the realm of heresy.

The Incarnation (and Heresies)

How can Jesus be both God and man? Isn’t this irrational? In this talk, Doug goes over the correct understanding of Jesus’s incarnation and exposes numerous mistaken ideas of it that have ended up being labelled as heretical.

Speaking of God: Limited Language for an Unlimited God

How can our words, designed to communicate limited reality, also speak accurately of an unlimited God? Here, Doug goes into the philosophical tradition based on Thomas Aquinas known as analogy to explain how finite wo4rds can speak of an infinite God..

Catholic Morality: From the Cradle to the Grave

Catholic morality is based on far more than just a list of rules – and understanding all of its sources is a big part of trusting it as a guide. In this talk, Doug goes into the sources of Catholic moral theology and shows that much of it is universally available to even non-Christians.

The contents of this website are ©2010-2023 Douglas Beaumont. This website is not affiliated with any organization with which the author is employed or associated. It comes with no authoritative declarations of freedom from doctrinal or moral error.
Loading Comments...