The “digital revolution” is all around us. In churches, schools, and our local Wal*Mart, we are being sold on the idea of the latest in digital technology. At an unprecedented pace, reality is being replaced by the simulacrum of technology (ironically, making the changes almost unremarkable).  Despite the pretentious (but, admit it, impressive) title, this article is actually focusing on something simple – something, in fact, which is obvious to those who have not spent too much time listening to what the pundits say:

Real life is better than its (admittedly impressive) digital replacements.

I used to work in a high-end sound system retailer. One day my boss asked me what “analog” meant (specifically with regard to its contrary – digital). It was a simple question, and I was surprised to find that although I could list many examples of the differences, I did not know the real distinction. “Analog” is short for “analogy” – namely, things that work by analogy with the real world. An analog clock has actual parts that move at a rate that allows its parts to measure time. An analog record player has grooves that vibrate a physical needle at the same rate that music vibrates.

In other words, analog retains the reality that it re-presents in other forms. Digital, on the other hand, refers to data – specifically, data that is represented using discrete (discontinuous) values (i.e., 0’s and 1’s, “on” and “off”, etc.). In other words, it is information about reality that is conveyed without being reality. What digital offers over analog is (allegedly) precision; however, as any audiophile knows, the real world is not trackable by this dualistic system. Sound, for example, cannot exactly be duplicated digitally, because smooth sound waves cannot be created using blocky steps. And of course we cannot hear 0’s and 1’s, so eventually digital signals have to be converted to analog – but this always leaves a “reality remainder” that digital fails to capture.

I think we’ve given up too much in our quest for cleanliness and precision – life just isn’t like that. “But isn’t it better?” Sort of. Digital is better in the same sense that brand new sheet music is better than sheet music that is ripped and torn, sure. But not in the way roboticly-precise music sounds compared to a human musician. The imperfection makes it better somehow. I think we recognize this intuitively: even when “the numbers” look “better on paper”, physical presence is often paramount. Be honest, which of the following events / objects are more soul-stirring? 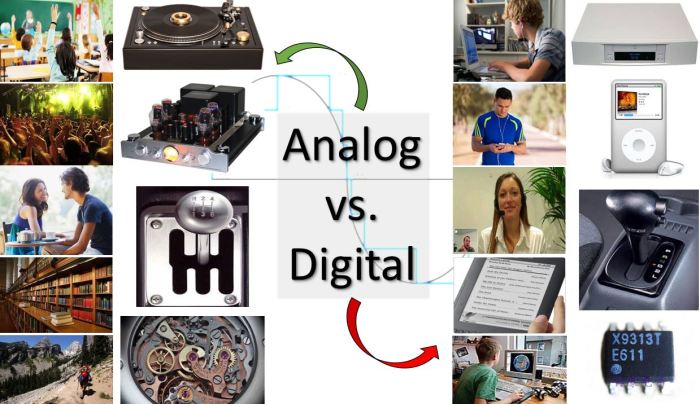 Would you rather listen to “perfect” music recorded in a digital studio through a pair of headphones, or attend a live concert with your favorite musician? Would you rather communicate with your loved ones through a high-definition monitor and 3D surround speakers, or have coffee with them in person? Which is sexier, the finely-tuned gears of a Rolex, or the computer chip inside a digital watch?

Records or MP3’s?
Tubes or circuits?
Trails or maps?
Texts or calls?

You get the idea. I hope.

The Church and the Classroom

Tech salesmen love to extol us with an endless diatribe concerning how the latest device will propel us to some new level of learning / productivity / whatever. But have we first-world wizards become happier? Has technology increased our quality of life – or just replaced it with more (and less fulfilling) work that is divorced from the world around us? I don’t know about you, but in all my years of employment I’ve never been busier, exhausted, and more out of shape, than when I work with technology.

There are a couple places where I think the “digital revolution” is particularly harmful: the church and the classroom. Again, I think our intuitions are being challenged by shiny new toys.

Easy access of information does not equate to learning – yet that is the “advantage” that bringing tech into the classroom is supposed to achieve. Study after study is actually proving that all this technology is distracting from real learning.

Note that in the “digital church” everyone in the audience can see and hear the “speaker” better than they would have in real life (after all, he’s 15′ tall on the main screen and his voice is broadcasted from a dozen speakers!). But even in churches that offer these digital “campuses” audiences will still flock (pun intended) to wherever the speaker is actually presenting.

Somehow, we continue to crave the real thing even when it is not as easily accessible or as impressively presented.

Why should delivery mechanisms matter? Isn’t the information the same? Isn’t the experience of life made better when it is bigger and louder?

The evidence is all around us: Why is are live plays still drawing crowds after motion pictures were invented? Why are movie theaters still thriving after home video equipment became ubiquitous? Why did paper sales increase dramatically after computers became commonplace? Despite our desire for order and obsession with sanitization, our very natures crave the physical, gritty material of reality (watch kids play before they learn that dirt is “bad”!).

Digital re-presentation, regardless of technical sophistication, lacks the physicality – the matter – of reality (i.e., its materiality). The reason matter matters is that we are material ourselves. Humans are embodied, physical beings designed to interact with other embodied, physical beings. There is no technology that can make the unreal real – that can replace presence with re-present-ation. It is one thing to accept the simulacra over reality as a necessary evil in modern life, it is quite another to embrace it as an improvement over reality in our lives.

It is not, and it cannot be.

“You don’t talk, you watch talk shows. You don’t play games, you watch game shows. Travel, relationships, risk; every meaningful experience must be packaged and delivered to you to watch at a distance so that you can remain ever-sheltered, ever-passive, ever-ravenous consumers who can’t free themselves to rise from their couches to break a sweat, never anticipate new life. . . . Grab your snacks, watch your screens, and see what happens. You are no longer in control.” (Screenslaver, Incredibles 2)

Gnosticism is an ancient heresy that taught, among other odd things, that the material world was basically evil. The Gnostics “held matter to be a deterioration of spirit, and the whole universe a depravation of the Deity, and taught the ultimate end of all being to be the overcoming of the grossness of matter .” In other words: spirit good, matter bad. Gnosticism made such a strong distinction between the two that what one “did in the body” did not even matter so long as their mind was “pure.” Salvation in Gnosticism was escape from the body into a world of pure spirit. (As a friend once pointed out, this twin focus on the spirit/mind and denigration of the physical/body is found implicitly in the doctrine and worship practices of many churches today – and it is often reflected in their architecture.)

The modern infatuation with technology is implicitly Gnostic. Technology replaces physical reality with mere images (representations / simulations) of reality – removing us, by degree, from the reality we are meant to live in. When we allow ourselves to accept technology’s replacement of reality (the simulacrum) as our reality – confusing information with matter – we are essentially embracing Gnosticism. (Plato’s Cave comes to mind).

Gnosticism, however, is false. God did not make human souls and just stick them into bodies which function as “earth suits” during the soul’s worldly sojourn. Humans are not just minds – and therefore information transfer is not the whole story. As naturally embodied beings, we are meant to experience reality via our bodily senses which “fill” our minds with the things of reality (not just information about reality). Thus, our close physical/bodily contact with reality fulfills our soul’s intellectual/spiritual yearning in a way that copies of reality cannot. Simulations make poor substitutes. We know this instinctively, but we are being told (implicitly if not explicitly) that second-rate technological simulacra are just as good (if not better!) than the reality they allegedly replace.

They are not, nor can they ever be.

I am fully aware that this article is going to appear digitally on the internet. Despite my criticism of the misuse of technology, I am not a Luddite (in fact I work in desktop support, have maintained an online presence since the late 90’s, and am a big fan of The IT Crowd). Technology has its place, and it does a lot of good when it is kept in its place.

Yes, I prefer a CD to an 8-track tape (but not a record!), and I use my smartphone to listen to audio books. But I would not trade my eyes for bionic lenses simply because I could see better with them, nor would I trade a real classroom and professor for a slick online video, nor would I replace my incense-filled, chant-sung, icon-and-statue festooned, sacramental church for auditorium seating, a coffee bar, and a “dynamic speaker” projected on the big screen.

The important thing to understand is that it is not necessary to allow real life to be pushed aside by its tech-simulations. We can read real books. We can talk instead of text (or at least use the phone for calls instead of instant messaging). We can visit friends and family and have them over to our messy homes instead of posting carefully coiffed pictures on social media. We can go to churches and schools that value interaction with the material world and each other more than an impressive high-definition stage show. If we let technology disrupt (or, worse, displace) real life, it is our own fault.

And it is a fault if we do.

Theaetetus: How, Stranger, can I describe an image except as something fashioned in the likeness of the true?

Stranger: And do you mean this something to be some other true thing, or what do you mean?

Theaetetus: Certainly not another true thing, but only a resemblance.

Stranger: And you mean by true that which really is?

Stranger: And the not true is that which is the opposite of the true?

Stranger: A resemblance, then, is not really real.