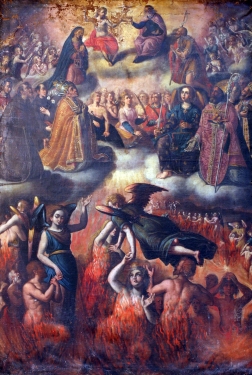 Although it only takes up a couple sentences in the Catholic Catechism, the doctrine of Purgatory seems to pose big problems for many Protestants. Sometimes the reasons for this angst are ill-conceived, however, so it’s a good idea to get a few things straight before criticizing. Purgatory is said to be “a place or condition of temporal punishment for those who, departing this life in God’s grace, are, not entirely free from venial [minor] faults, or have not fully paid the satisfaction due to their transgressions.”* That’s pretty much it.

One of the biggest issues with Purgatory is that it answers a question that Protestants don’t (or rarely) ask, and then it is attacked as an answer to questions they do ask. Because Purgatory concerns ultimate salvation (perfection – glorification) – not initial salvation (forgiveness – justification), the question Purgatory answers is How is a sinful person purified before entering the presence of God? (as opposed to How does a sinful person escape Hell?). Because the purification aspect of salvation is often ignored in Protestant circles, Purgatory can seem like part of other phases of salvation with category mistakes ensuing.

A few other clarifications may help to ease Protestant discomfort with the idea of Purgatory.

“Each man receives his eternal retribution in his immortal soul at the very moment of his death, in a particular judgment that refers his life to Christ: either entrance into the blessedness of heaven -through a purification or immediately – or immediate and everlasting damnation.”*

Purgatory is sometimes thought of as a third afterlife option besides Heaven and Hell. But “one of these things is not like the others!”* Purgatory is not a third eternal state, and it does not contradict the idea that believers go to be with the Lord after they die. Heaven and Hell are the only final locations available to human beings. So what is Purgatory? It is a temporary state of being for impure souls entering Heaven.

Unlike Heaven and Hell, Purgatory is not permanent. Because it is a state of purification for souls on their way to Heaven, it will cease to exist after the Resurrection (and perhaps before). There will no need for Purgatory once all Heaven-bound souls arrive.

Finally, although pictured in various spatial and temporal ways throughout history, and often described in those terms, Purgatory is technically a state of existence that is outside our time and space (aeviternity). Unfortunately, it is both difficult and cumbersome to speak of disembodied souls in metaphysically accurate terms. It is much easier to say souls are “in Purgatory for a number of years,” just as it is easier to say God has been “in Heaven since the beginning of time.” Thus, it is important to keep in mind that these terms are being used in analogical or equivocal ways, and any criticisms based on seeing Purgatory as a place in time are misplaced.

Purgatory is also not “Limbo.” Limbo was the title given to the temporary “residence” the just who were excluded from Heaven until Christ’s sacrifice and ascension into Heaven (aka “Hades”). Limbo is used when describing the permanent “residence” of unbaptized persons who die without having committed personal sin (esp. children).* This latter idea of Limbo is historically disputed, and is not part of the dogma of the Catholic Church.*  (Although Catholicism recognizes the normative necessity of baptism for the forgiveness of sins, it also notes that God is not bound to His normative means and so exceptions are available.*)

Purgatory and Salvation by Works

“Those who, after death, exist in a state of purification, are already in the love of Christ who removes from them the remnants of imperfection.”*

Because Purgatory is often said to involve suffering or works to get into Heaven, the result is that Purgatory often sounds to Protestant ears like works-salvation (earning one’s way into Heaven by doing enough good works). But this is not the case. Purgatory is not a second chance at salvation – all souls in Purgatory are already saved and about to enter Heaven. Catholicism teaches that initial salvation is by God’s grace – not by works (which is why even babies can be baptized). This does not mean that works do not affect one’s ultimate salvation, though, because part of salvation is purification from sin (“sanctification”) – and a person’s purity is affected by what a person does.  Sinning causes impurity of the soul, and this will simply not do in Heaven where nothing impure can enter (Rev. 21:27). But how many people achieve the purity required for Heaven in this life?

Purgatory is where the soul is purified by penance in preparation for Heaven. If we do not do enough good and avoid enough evil to attain purity in this life, Purgatory accounts for how that occurs before reaching the heavenly state. People don’t go to Purgatory if they are not already on the way to Heaven, because purging a Heaven-bound person from all remaining sin is its purpose. Some, in fact, have referred to Purgatory as Heaven’s “ante-chamber.” I like to think of Purgatory as Heaven’s “mudroom” – a place to get cleaned up before you go and track dirt all over the rest of the house.

Purgatory is not a fiery punishment like Hell. It is rather a joyful suffering where souls are “aflame” with the pain of desire for purification so they can survive the beatific vision of God. Perhaps like exercise or studying, the pain actually makes the attainment of the goal even sweeter.

“Purgatorial temporal punishment is due to sin, even after the sin itself has been pardoned by God.”*

It also sounds odd to Protestants that one is expected to pay for their sins since Jesus already paid for them at the cross. What more is there to pay for? Of course, we’re dealing with an equivocation here. Jesus paid for the eternal consequences of sin (resulting in forgiveness), but that payment does not necessarily remove the temporal consequences of sin (resulting in perfection). This idea is found in the Bible: God forgave Adam and Eve, but they still suffered the consequences of the Fall. God forgave Moses, but did not let him enter the promised land. David was forgiven for murder, but lost his child.

If I break a window, I might be forgiven the instant I apologize – but the damage remains until I have it fixed. One way to state the purpose of Purgatory is that it allows saved souls to do this penance for sins that were forgiven, but which were left temporally “unpaid.” This distinction is often missed by Protestants who tend to focus solely on the forgiveness aspect.

Further, sin damages the soul. Fixing this damage is not automatic – it comes by acting rightly and by suffering (Mt. 3:8; Lk. 17:3; 3:3; Rom. 5:3–5; Heb. 12:11-14). Often, though, not all sanctification is accomplished in this life (e.g., “deathbed converts”).  Purgatory, then, can be seen as the final stage of sanctification – “the final phase of Christ’s applying to us the purifying redemption that he accomplished for us by his death on the cross.”*

“The Catholic Church, instructed by the Holy Ghost, has from the Sacred Scriptures and the ancient tradition of the Fathers taught . . . that there is a purgatory.” (Denzinger, Enchiridon, 983).

The idea behind Purgatory finds biblical support from verses like Matthew 12:32 where it seems that in some way sin not forgiven in this age is forgiven in the age to come. Also, Purgatory is seen in 1 Corinthians 3:11-15 where we see saved people suffering loss based on what they did in this life. Now neither of these prove the existence of some purgatorial state between death and heaven – both can be interpreted in other ways. This may sound like a huge admission on the part of Catholics, but the situation is similar to much Christian belief.

The doctrines of the Trinity and the Incarnation have some seriously difficult counter-proof texts to deal with – and no texts that simply spell the doctrines out. Yet these are absolutely foundational for the Christian faith. Later doctrines like the idea of an “invisible” church, and sola scriptura are not based on clear biblical proof texts either (and can also be challenged by counter-proof texts). Or consider the moral status of slavery or polygamy: proving these are sinful is virtually impossible from Scripture alone, yet most Christians consider them sinful. Other practices like tithing to a church, praying to Jesus, or meeting in a church building are “unbiblical” in the sense of having no biblical support.

In each of these cases tradition has much more to do with the Church’s view than Scriptural proofs. The real question for all Christians, then, is which tradition one will follow. Purgatory comes from very early Christian tradition and continues up to today in the majority of the Church. Martin Luther did not deny Purgatory and other Protestants continue to affirm it as well (C. S. Lewis is one of the more famous, but recently Jerry Walls came out with a scholarly work suggesting Purgatory for Protestants).

Right or wrong, the doctrine of Purgatory is not a third eternal state, it does not contradict Jesus’ sufficiency for salvation, it is not legalistic or unbiblical, and it follows from early Church tradition and theology. As Peter Kreeft once put it, anyone who believes that people are impure while on Earth and pure once they reach Heaven already believes in Purgatory. Whether it is a purifying fire, a great terraced mountain, or a state divorced from both time and space, something happens to cause this purification. Beyond that, the details of Purgatory are almost all speculative and generally unworthy of serious criticism or angst.

The contents of this website are ©2010-2022 Douglas Beaumont. This website is not affiliated with any organization with which the author is employed or associated. It comes with no authoritative declarations of freedom from doctrinal or moral error.
%d bloggers like this: