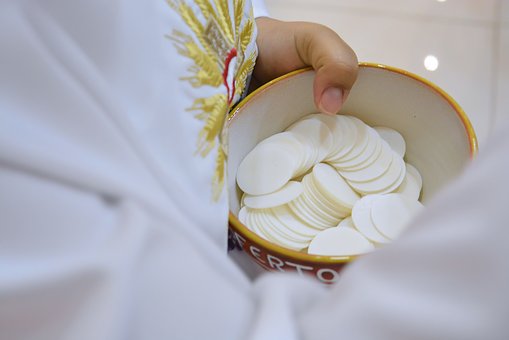 In 2018, the Congregation for Divine Worship and the Discipline of the Sacraments reiterated the Church’s teachings regarding the matter of the Eucharist – notably that Communion hosts must be wheat bread, which by definition contains some amount of gluten. This has led some people to think that celiacs (those allergic to wheat / gluten) have effectively been “banned” from receiving the Eucharist. Others, though, have stated that celiacs need not worry about receiving the host, because after it is consecrated the host is really Jesus’s body instead of wheat.

Both of these positions are theologically mistaken.

Transubstantiation is a manifest miracle, but it is not material magic. Failure to understand what transubstantiation is and entails has led to numerous “superstitions” regarding the sacramental elements. These include the idea that germs cannot survive contact with the holy cup, or that the original ingredients of the wine or host cease to have their associated physical affects.

Philosophically speaking, “substance” refers to what a thing truly is, and “accidents” refer to how a substance can be modified. If a skinny dog changes into a fat dog, that’s “accidental change” because it’s still a dog. If a cow dies, that’s “substantial change” because it turns into meat.

The Eucharist is the result of transubstantiation – a miraculous type of change where the host’s accidental properties (bread) remain exactly what they were even though its substance changes (from bread into the body, blood, soul, and divinity of Jesus Christ). The original properties of the bread remain, though – and produce the same affects. Therefore, saying that celiacs don’t have to worry about receiving the host because it is really Jesus instead of wheat is like saying someone who is allergic to beef can safely eat a hamburger because it isn’t a cow. Just as one can get drunk from the wine before and after the consecration (1 Cor. 11:21), a celiac will react to the host in the same manner before and after the consecration

Now, wheat bread and grape wine are the proper matter of the Eucharist because Christ instituted it this using those materials (Mt. 26:26-29 see also Jn. 12 & 15). So, a gluten-free host makes for an invalid sacrament.

Celiacs are not excluded, however – for they may request low-gluten hosts, or receive communion under the “species” (sensible qualities) of wine alone. This is because “both under the species of the bread and under the species of the wine the living Jesus Christ is all present, with His Body, His Blood, His Soul and His Divinity” (The Catechism of St. Pius X, Q&A 17).

For those who, for whatever reason, cannot receive either species, spiritual communion (uniting of oneself to the Mass through prayer alone) can be made.

It is not the case that the Catholic Church bans celiacs from Communion, but for theological reasons they must receive it in a modified manner.