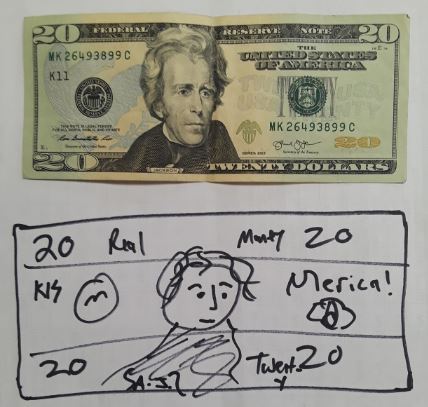 I have heard it said with regard to studying cults and other religions, that it is better to simply know the real thing than study counterfeits. This idea is backed up with the allegation that bank employees don’t learn to spot fake bills by studying the counterfeits – instead, they study real bills until they know them so well that they can spot a counterfeit easily.*

While the claim concerning counterfeit detection strategies might be challenged, I want to discuss the analogy itself. The glaring problem with it is that counterfeits imply a standard against which they may be judged. Thus, in order to “study real bills,” one must first be sure that they have real bills to study. But if someone requires training to detect counterfeits, that implies that person does not already not know the real thing. Indeed, one must know what the method of detection is to even begin such a study. Imagine what would happen if such a person went on to challenge the trainer’s ability to tell the difference!

A Christianity By Any Other Name

Anyone who has done serious work with Mormons, for example, knows the frustration of demonstrating facts that challenge or destroy their religion’s claims, only to have them smile and continue on with their presentation as if nothing happened. It’s such a common occurrence, that Southpark devoted an entire show to the problem. The reason is that, for Mormons, faith is a feeling about their founder Joseph Smith Jr. called a “testimony.” Once that “testimony” is received, it is as if historical facts and logic cease to be factors in belief.

Similarly frustrating is an encounter with a Jehovah’s Witness – but for radically different reasons. JW’s do not rely on feelings about their founder, but instead on a thoroughgoing trust in an anonymous “prophetic organization” called The Watchtower. Showing them that this “prophetic organization” has numerous false prophecies or that the Watchtower’s Bible translation is clearly biased despite claims to the contrary, barely phases them because they are not allowed to indulge in non-Watchtower-approved literature for fear of being disfellowshipped as an apostate.

Ecumenical dialogue between Catholics and protestants can also be very difficult – but again, for very different reasons. In this case, the issues that concern both parties often differ not only in the particulars of dogma, but also how those particulars are reached. It’s an issue of authority – for the Catholic, the Church Christ founded is to be discovered as a matter of historical fact, and then trusted in faith. For the Protestant, a denomination’s confessional tradition is ultimately authoritative, while in Baptist and other independent circles, religious authority is limited to each individual’s private interpretation of the Bible. In either case (and in truth, these two methods are one and the same), non-Catholics hold that their understanding of the Bible trumps the Church’s traditional understanding.

Of course, these problems of religious common ground only increase when one goes outside even nominally-Christian religions.

Before one can simply “study to show thyself approved,” one must know the right thing to study. It does no good to confidently assert that studying truth is to be preferred to studying counterfeits if there exists no universal standard for truth. And if sincere Christians cannot even agree among themselves on practically any idea worth discussing, how can Christian apologists hope to deal with cults or other religions without knowing what they believe and, more importantly, why they believe it?