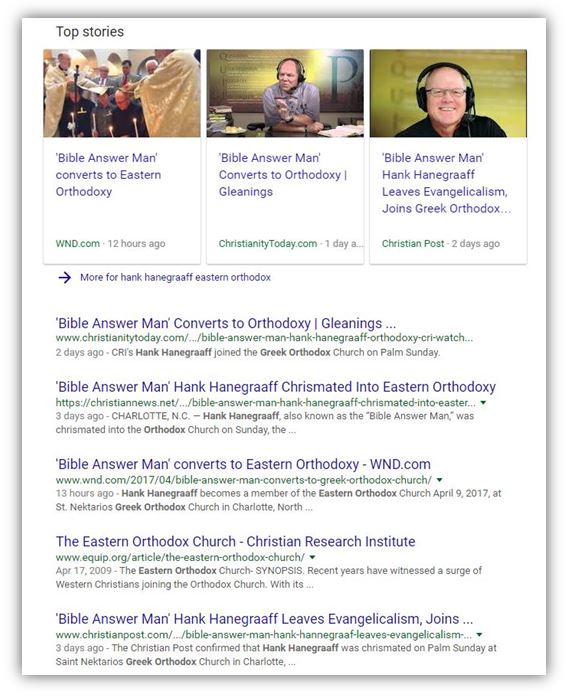 As I mentioned earlier, on April 9th, 2017, Hank Hanegraaff, long time host of the Bible Answer Man radio program and president of the Christian Research Institute, became a member of the Eastern Orthodox Church.

Naturally, many Christians freaked out.

Evangelicals were saddened, fundamentalists said he was going to hell, Catholics were just happy he wasn’t Protestant anymore, and the Orthodox celebrated a new “homecoming.” Someone even made him a Facebook support page.

While this news is sending shock waves through the sizable community that Hank influences, I don’t really think it’s that big of a deal. Fundamentalist hand-wringing over Hank “leaving Christianity” are just plain ignorant, and for Catholics although it’s a step in the right direction, Hank’s only moved from being a separated brother to a schismatic one. Meh.

It is not the above extremes I am interested in here, but rather on how Hank has managed his transition from Evangelicalism (broadly conceived) to Eastern Orthodoxy. I’ve had several friends make this move, and supported them when they did. But something about Hank’s “conversion” seemed questionable to me after no action was taken by CRI. So for the first time in over a decade, I tuned in for the next day or two to hear how he handled it.

On his first couple “post-conversion” shows, Hank just kind of blew the whole thing off as if it were a simple church hop. He even expressed a sort of confused surprise that anyone thought it was such a big deal or that it should be seen as a change at all. For example, on the April 10th broadcast of the Bible Answer Man, Hanegraaff stated:

I am now a member of an Orthodox Church, but nothing has changed in my faith. . . . I believe what I have always believed, as codified in the Nicene Creed, and as championed by mere Christianity.”

Then, on April 11th, he said something similar:

How can this be? How can someone who spent 30 years as a Reformed / Evangelical icon (pun intended) say his beliefs did not change when he became Eastern Orthodox? It seems that either Hank wasn’t very evangelical as an Evangelical, or that he’s not very orthodox as an Eastern Orthodox.

What Is an Evangelical?

Part of the problem is that “Evangelicalism” is notoriously fluid idea that describes not a group united by a settled theology, but more of a large category of non-denominational Christians. I won’t go into it here, suffice to say that whole books have been written on the subject.

However, there are at least a few items that are generally agreed upon besides the so-called “essentials” of Christianity that nearly all Protestants/Evangelicals are in agreement with, such as the idea that the Bible alone is the authority for faith and practice (the Reformed doctrine of Sola Scriptura) and that people are saved by faith apart from works (the Reformed doctrine of Sola Fide). Neither of these 16th century theological innovations are accepted by with the Catholic Church or the Eastern Orthodox. How, then, can Hank justify his becoming Orthodox as not reflecting a theological change? Basically, he redefines the terms.

Lest this sound like a cheap shot, consider Hank’s post-conversion explanation of Sola Scriptura as:

In terms of Sola Scriptura, I’ve always been committed to the Bible as the infallible guide for faith and practice. And I think that’s what it means – it means that the Bible is infallible and is inspired by the Holy Spirit…”

This is simply not what Sola Scriptura means, however. All Christians believe that the Bible is infallible and inspired – that’s basic. The doctrine of Sola Scriptura, is the Protestant position that Scripture alone is the final authority in matters of faith and practice (as opposed to the Church which composed it).

Next, consider Hank’s treatment of the other big Protestant “sola” – Sola Fide. After nicely handling the false assertions of a caller regarding the Catholic view of faith, Hank stated that with regard to faith and works,

It had been settled since the apostolic era that salvation was always granted to us by the mercy of God – granted to those who followed Jesus Christ . . . an opposition of faith versus works was unprecedented. . . . True faith is not just a decision, it is a way of life. . . . Scripture teaches, ‘you see then that a man is justified by works and not by faith alone,’ which is to say we cannot add to anything to what Christ has done. Faith by itself, however, if it does not have works the point is as James puts it is dead. . . . we need to participate in an act of faith, because if we don’t, we’re demonstrating that what we have is not a real faith. Now again, there is a difference between Protestants and Catholics, and Orthodox on this position, but I am out of time.

Now it must be admitted that Sola Fide (“salvation by faith alone”) is a very slippery doctrine among Protestants. Hank defines Sola Fide as many would, but that is not saying much as he is clearly being very careful with his words. Again, all Christians believe that salvation is by God’s grace – that is not the issue. All Christians believe that faith is (somehow) our part in the mix (Eph. 2:8-9). That is also not the issue. The issue with all of the protestant “sola’s” is the “sola” (alone) part. One must always ask “alone – part from what?” With Sola Scriptura, it is the Bible alone apart from the Church. With Sola Fide, it is faith alone apart from works (hence Martin Luther’s aversion to the book of James, which Hank quoted above). Hank’s description of Sola Fide (lacking reference to the Protestant understanding of imputed righteousness and other important details) is generic enough to please most any believer.

Thus, neither of Hank’s explanations of the Protestant sola’s are in line with the Reformers who found them worthy of destroying Church unity.

What Is Eastern Orthodoxy?

A traditional understanding of Eastern Orthodoxy is not, however, required to become Orthodox. Whereas, for example, most Protestant denominations each have their own detailed “confessions” or (for Evangelicals) “doctrinal statements”, and the Catholic Church has a robust Catechism and a living Magisterium that the faithful must adhere to, Orthodoxy is very basic in its declaration of faith. Basically, if you believe the Nicene Creed, you can be Orthodox.

The reason behind this is at least two-fold. First, Orthodoxy is far more mystical in its theology. As one commentator put it, “Orthodoxy has avoided any tendency to restrict the vision of God’s revelation to only one avenue of its life, the Church has also avoided the systematic or extensive definition of its Faith.”

Second, very little in the way of doctrinal development or dogmatic pronouncements has occurred in the East for over 1,000 years. Thus, only the first seven ecumenical councils are considered binding – and there is very little in them that any Christian group today completely disagrees with (notably, the veneration of icons). Indeed, even non-creedal groups tend to find some way to force the Creeds and Councils to sound like they are in agreement (example).

So, again, the question is: Was Hank a really evangelical as an Evangelical, or is he not a very orthodox as an Eastern Orthodox?

I think it is telling that when Hank “came out” as Eastern Orthodox, he did not identify himself as such. Rather, he simply said that he “became a member of the Greek Orthodox church”. This casual mode of speech seems designed to make light of what, for most, is a life-altering decision. While it is tempting to chalk this up to saving his job, it seems to me that Hank is doing what he (and many Evangelicals) have done before: subtly redefining historical Christian doctrine in ways to match his own views. (Consider that when Hank finally revealed his Preterist view of Revelation, he refused to accept the label – opting instead for the embarrassingly pretentious title of “Exegetical Eschatologist”).

It also might be explained by another hold-over from his religious past: the idea that because everyone disagrees over some non-essential things, we can all agree to disagree over them. For example, on April 12th, Hank presented a sort of personal creed made up of a mix of ancient creeds and Bible verses (as reflected in his published letter) which he later identified with the “essentials” of the faith. He then dismissed others as being “secondary” and simply part of continual debate within Christianity. Later, expressing what can only be called a confused view of the nature of Christian unity, Hank made the bizarre claim that Catholicism like Eastern Orthodoxy and Lutheranism is not “monolithic” in its beliefs (click HERE if you don’t see the problem with such a claim).

It seems, then, that Hank views the problematic theology behind the two greatest schisms in Church history as being merely “secondary,” and not worthy of serious concern. While sounding nice to theological liberals, such a stance will grate against conservative traditionalists on both sides.

But, for the reasons stated above, it won’t keep anyone out of the Eastern Orthodox church.*

The reason I don’t see Hank’s conversion as a big deal is not because it is not a big deal per se, nor that it should not be a big deal. Rather, it is that given Hank’s own description of this move, it doesn’t qualify as a serious theological change in his beliefs. That, though, is the problem. Neither Evangelicals nor Eastern Orthodox believers should be content with the kind of feeble ecumenism that makes light of serious differences which have, unfortunately, cost the Church its unity and many believers their livelihood and even lives.

ADDENDUM: Since this article was written, Perry Robinson, who worked with Hank at CRI for years, has put together some important material that is worth the read HERE and HERE.

*NOTE: I actually attended the “Becoming Orthodox” classes that St. Nektarios (Hank’s church) offered back in 2010 or so, and this is where my understanding of such a transition was formed.