Introduction – Who are the Branch Davidians?

An obscure sect for its first 60 years, the Branch Davidians were made famous when, in 1993, one group led by Vernon Howell (aka David Koresh) had their Texas compound in McLennan Texas (called “Mount Carmel“) raided by the ATF on charges of possessing illegal firearms as well as sexual abuse and misconduct. After a firefight left four agents and six Branch Davidians dead, they were subsequently besieged by the FBI.

The nearly two month long siege ended with a massive fire that destroyed the compound buildings. The compound burned to the ground, leaving behind only foundational concrete and debris.

The outcome of the entire affair was that 76 Branch Davidians were killed –  including Koresh, many women, and 17  children. The Mount Carmel raid (and the 1992 Ruby Ridge incident) were cited by Timothy McVeigh and Terry Nichols as motivations for the Oklahoma City bombing on April 19, 1995 (the second anniversary of the siege).

In October 2012, I was in visiting Baylor University with some friends and I convinced them to go try to find the remains of Mount Carmel. Searching the net, I had found several personal webpages – some explaining how to get there, and some including a few pictures (1, 2), but few were recent. This quick rundown of our trip might be of interest as it is up-to-date as of Fall 2012.

Here are the directions to the Branch Davidian compound in case you’re curious.

We drove slightly past the new Chapel, but stopped when we came to a Private Property sign on the road. We just parked on the left side of the Chapel as it was the only building in the compound area.

Driving past the gate, there is a Branch Davidian sign and behind it, under the tree, is a memorial to those who died in the siege.

The center marker shows David Koresh’s name in the list, but it is not set apart in any way.

Along the road are smaller memorials each with their own small tree/bush planted behind it.

This image shows the compound prior to the siege and subsequent fire. The rebuilt chapel was the only building on the compound property proper. Behind and to the left side of the chapel we could see the original foundation (the back part, now covered with building supplies, was apparently Koresh’s hideout). We parked to the left of the Chapel and, seeing no one around anywhere, got out to explore.

We did not get inside during our visit, but we saw through the windows that the interior looked like any small community church (here are someone else’s pictures from inside the chapel. Note especially the End Times chart – the Branch Davidians have not changed their theology much since the siege, as we were to discover later).

There were fliers available at the front door that told the story of the 1993 siege, and in front of it was this sign: 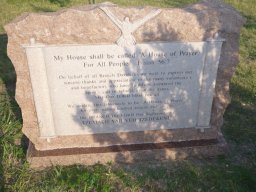 In the flower garden next to the Chapel steps was this odd marker (I do not know what “Stone Church – Sabbath” refers to): 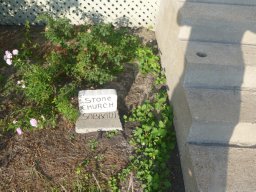 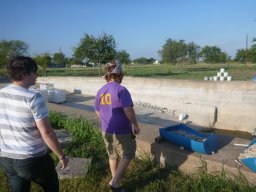 Right next to the foundation area at the rear of the Chapel (visible next to the tractor in the image below) is “The Pool” – a large ramp descending down from the left to a depth of about 15 feet. The Pool’s large rectangular cement structure is visible in virtually any overhead picture of the compound. When we were there it was mostly empty but was being filled by what appeared to be rain-catcher tubs filled with rocks (for filtration?).

Not wanting to take a dip in the cool afternoon sun, everyone else went back to the car while I turned to my left to see what lay beyond a barely noticeable line of cement across the lawn.

The largest remaining architectural feature of the compound is an underground area visible as partially uncovered in overhead photos. Walking toward this area, I could see a circular depression ion the ground where the tower once stood (and where one Branch Davidian died by gunshot). The tower is also visible in overhead shots.

The large underground area is divided into two main sections, both flooded with swampy water and plant life. A tunnel at the far end under the road may indicate that this is used for runoff from the adjacent meadow, but this part of the road was beyond the Private Property sign, so we did not investigate. 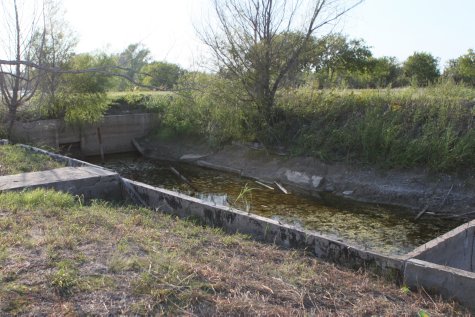 The intersecting cement block above turned out to be the roof of an underground tunnel that apparently used to connect this underground area to a buried school bus. I did not discover this because I headed back to the car without looking around much. Two second-bravest of my group of friends went over to see the Underground Area after I got back, and they found The Bus.

There is very little left of the bus which was buried and used as a storm shelter, but you can find it easily by following the tunnel roof into the overgrown area under a tree. In the picture below was taken looking toward the bus / tunnel roof from the chapel, (the “weed line” in the background indicates the edge of the underground area – the road is to the left).

Here is all we found of the bus:

To the right of the bus is the tunnel entrance, now nearly filled in with dirt. As usual, I did not have a flashlight, but after confirming that it was safe by taking a few flash shots with my digital camera, I went in anyway.

The entrance lets in very little light, so it looks like a deep cave, but it actually turns 90 degrees to the left just a few feet inside and then heads straight into the (now submerged) underground area.

One of my friends collects sand/soil samples from all his interesting trips and as we left the compound he realized he should have got some dirt. So we turned around and headed back.

He got his dirt, but as he headed back we turned to see someone walking toward us from the Chapel. It turned out to be a real-live Branch Davidian! He told us he thought God was telling him to talk to us since we had come back a second time (scary – we never saw him on our first trip!).

The Man of Sin

He then proceeded to tell us about how David Koresh was the “Man of Sin” (cf.  2 Thessalonians 2:3) who had to come in order for Jesus Christ to return (that, you see, is why he could mandate celibacy for all the men and then take their wives – he was the one sinning – oh and plus he needed to have 24 kids to fulfill some prophecy). So, thanks to David K’s sinful lifestyle and death, Jesus can come back.

Among other barely coherent “facts” he shared, we were told that the Pope is a 33rd degree Mason (as is George Bush) who controls all the banks through the Vatican, nuns marry Archbishops, and Waco is the new Jerusalem as indicated by the lack of gays and lesbians around and the fact that  it is on the same latitude as Jerusalem (yes, we checked),

Our new friend informed us that the Sabbath is not when “we thought it was” (not sure when he thought we thought it was) because the Gregorian calendar and it got messed up. The Adventist connection to this group helped explain the obsession with the Sabbath and the End Times (what David Koresh brought to the table was his self-identification as a sinful messiah, plus a bunch of guns and underage polygamy). He would not tell us when the “real” Sabbath was because (and I quote) “he had to give us some reason to come back.” (Odd – how would we know when to come to his church if we did not know when it met?) As it turned out, we found out anyway because it was listed on their flier (it’s Sunday – I guess they are Baptist after all!).

The real kicker was when he explained that God is not a Trinity but a . . . well, he did not have a word for it – but God is four, not three. There is the Father, Son, and Holy Spirit, of course – but there is also a female Mother God because Hebrew words ending in “ah” are feminine (shekinah, Jehovah, etc.) and some name of God means “mighty breasted one” (from the Hebrew shaddai, I think). This prompted him to warn the husband of the married couple about treating his wife right, because if he didn’t he was violating the feminine image of God (create in OUR image – remember?). His proof text for this was 1 John 5:7 – “For there are three that bear record – the Spirit, and the water, and the blood.” You see, blood and water came out of Jesus’ flesh at the cross and the Father, the Word, and the Holy Spirit are one so they are all somehow one but this other spirit isn’t so . . . I honestly got so confused by then I just sort of stared over his shoulder for awhile.

After about 15 minutes he cut us loose and we made haste to the nearest BBQ joint to discuss whether or not we should convert. After much debate, we decided to just stay the course with good old orthodox Christianity.

But if the END comes any time soon, we know where to go.