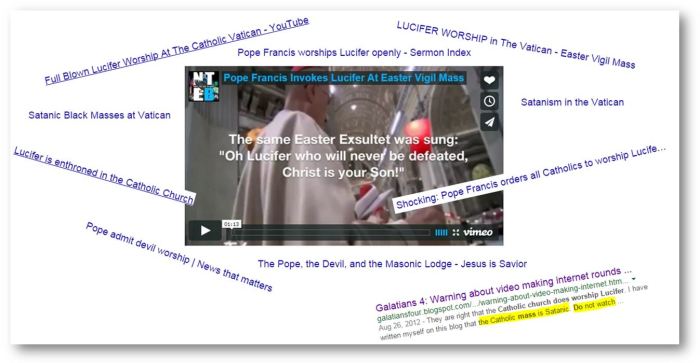 One of the most ridiculous anti-Catholic propaganda claims on the interwebs today is the charge that Satan is worshiped in the Catholic Mass. A quick web search on “Lucifer Worship in Catholic Mass” revealed that this silliness is ubiquitous online – and thus, incredibly, seems to warrant a response.

The Latin Mass referred to here is the Easter Exsultet, which one video purportedly translated for its viewers:

Flaming Lucifer  Lucifer finds mankind I say,
O Lucifer who will never be defeated, Christ is your son.

The main (but certainly not the only) problem with this “translation” is that it leaves the word “lucifer” untranslated. That’s right – “lucifer” is a Latin term. The key to fooling the viewer of this video is acting as though the word is referring to . . . well, everyone knows who Lucifer is right?

The word lucifer is a Latin term derived from lux (“light”) and ferre (“to bring”). It was originally used to refer to the planet Venus (the “Morning Star”).  In the Bible, the Hebrew term hēylēl (used only in Isaiah 14:12)  for “day-star, son of the morning” was originally translated in the Catholic Bible (i.e., the Vulgate) using the Latin lucifer.

Now, it is popularly thought that the word “lucifer” is actually a proper name – for Satan, no less. This is because, early biblical commentators like St. Jerome saw the passage in Isaiah as a description of the fall of Satan (“Lucifer” allegedly being Satan’s name before he rebelled against God). Centuries later, the Latin word lucifer was left as is by the translators of the popular Protestant King James Bible (only there in Isaiah, even though the Vulgate uses the word lucifer elsewhere e.g., Job 11:17, 38:32; Ps. 109:3; and Ecct. 50:6).  This practice has been maintained even in the updated versions of the KJV, but not by most modern translations.

But Lucifer is not Satan’s name!

While it must be admitted that some of the wording in Isaiah 14 does seem to reflect an early tradition of the Church concerning Satan’s fall (and so the description might be a symbolic double referent), the verse in question specifically states that it is referring to the King of Babylon (as any good commentary will tell you). Satan is not mentioned anywhere in the biblical passage. Ironically, then, it is Catholic tradition that these critics use to support their case against Catholicism!

Who is Lucifer – Jesus or Satan?

Now that the negative case against the Catholic Mass has been dealt with, we need to turn to the positive case. Why is “lucifer” in these lyrics? Well, when we turn to the New Testament it becomes perfectly clear who the apostles called “The Morning Star”- it is Jesus Christ!

So, according to the Bible, “lucifer” is Jesus!

The above anti-Catholics, then, are reading a mistaken Protestant Bible translation into a Catholic prayer which is based on a proper translation of Scripture!

The Church offers the correct translation of the Latin Mass in question:

“May this flame be found still burning by the Morning Star:
the one Morning Star who never sets, Christ your Son.”

This beautiful prayer is said at the Easter vigil as Catholics (holding candles to ward off the darkness) look forward to the coming of the dawn, and, someday, the return of Christ himself.

It is nothing short of slander to suggest that the Catholic Church worships Satan. The Easter Exsultet is all about the overcoming of darkness with the light (lux) of Christ, the light bringer (literally the lucifer). The fact that this Latin term from a Catholic Bible has been confused by English speakers due to a mistaken Protestant Bible translation makes for the irony of legend!