Popular Reformed Baptist blogger James White has done some good work on things like Mormonism, Islam, and KJV-Onlyism. (Not to brag, but I have his book on it signed). Of course, White’s work is not always consistent in quality – and here I want to zero in on one of his oft-repeated and problematic assertions concerning John 6:44. White uses this verse as a standard proof text to support his Calvinistic belief that all those drawn by God the Father come to His Son, Jesus Christ and are saved.

One of my favorite YouTubers has already explained White’s error HERE (and then, when White continued to not get it, again HERE). Although the YouTuber did a perfectly good job exposing the most significant flaw in White’s thinking, he wisely didn’t go too deep into the logical weeds. I’m going to do that here because White’s interpretation of the passage is definitely, absolutely, and without question, illogical – and it is illogical at such a basic level that it should call into question White’s reasoning on other issues.

So here is the passage in question:

That’s the translation from the Reformation Study Bible, but HERE are a few more in case its accuracy is doubted. For comparison, here is Jame’s White’s translation and commentary on the verse:

Note that from the statement, “no one is able to come to me unless the Father who sent me draws him and I will rasie him up on the last day,” White gets, “all who are drawn are also raised up.” In White’s view, then, being drawn guarantees [coming to Christ which guarantees] being raised up.

As will be shown, even on White’s translation, such an interpretation is objectively illogical.

Logic is essentially a means of precising common language into a form that can be objectively evaluated. This involves a bit of restatement – but fortunately the verses in question are pretty straightforward. I’ll discuss White’s understanding according to the two most basic logical methods.

When a statement is expressed with words like “all,” “some,” or “none,” then Categorical Logic is the go-to method. It’s simple and are restated quite intuitively. So let’s compare a logical rendition of John 6:44 with White’s interpretation of it and see if they match.

There are only four categorical proposition forms (S=subject, P=predicate): (1) All S is P, (2) No S is P, (3) Some S is P, and (4) Some S is not P. To keep the logic clear, double negative statements (like “no one…unless”) are restated  into positive assertions (e.g., one would not use, “No S is not-P”). In categorical terms, then, “No one can come to me [Christ] unless the Father who sent me draws him” would be stated as:

All those who come to Christ are those drawn by the Father.

Here’s a diagram to help the visual learners out there: 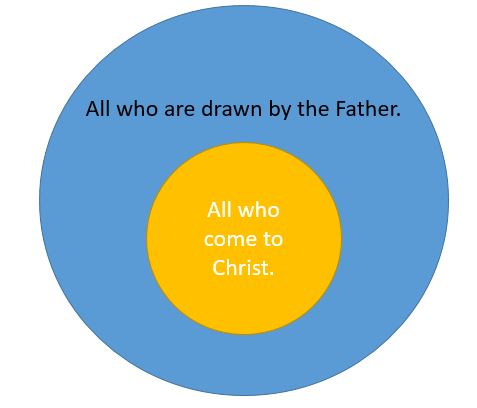 Here, though, is Jame’s White’s interpretation:

All those drawn by the Father are those who come to Christ.

As you can see, this is not the same thing. In fact, it is the opposite of what John 6:44 says.

White commits a classic fallacy known as Illicit Conversion. This occurs when a universal truth is asserted of a subject, but then the universal qualifier gets switched to the predicate. For example, the statement “All of my cars are blue cars” cannot be logically converted to “All blue cars are my cars.”

Maybe White’s understanding can be salvaged by a different logical method? Propositional Logic deals with things that Categorical Logic cannot – such as necessary and sufficient conditions. A necessary condition is one which is required for – but does not guarantee – another condition (for example, it is necessary to be a student to be a graduate). A sufficient condition is one which guarantees – but is not necessary for – another condition (for example, graduation guarantees that one was a student). Note, however, that in both cases not all  students become graduates!

Propositional logic represents both of these relations with a single statement in the form of a conditional (“If…then…”):

If graduate, then student.

Notice that, once again, the statement cannot be logically converted, because this would be switching the kinds of conditions expressed:

If student, then graduate.

Let’s see how it would work out if White’s view of John 6:44 was stated in terms of necessary and sufficient conditions. First, let’s translate John 6:44 propositionally:

If someone comes to Christ, then he was drawn by the Father.

This tracks with the wording of the original verse. Here, though, is Jame’s White’s interpretation:

If someone is drawn by the Father, then he comes to Christ.

Once again, the latter does not flow logically from the former and is actually the opposite of what was actually stated in John 6:44.

Another way to evaluate these two statements is to put them into a hypothetical argument. In logical form we would have:

“All that the Father gives me will come to me, and whoever comes to me I will never cast out.” (John 6:37)

Now, if “gives” in John 6:37 and “draws” in John 6:44 mean the same thing, then it would  logically support White’s interpretation. This is because, categorically, we would have two statements that reinforce each other:

Between the two we’d have overlapping categories that included all of each:

So, once again, if “given by” and “drawn by” mean exactly the same thing here, then  White’s interpretation of the entire passage could (now) at least be said to be logical.

But do they mean exactly the same thing here?

Who says that “drawing” and “giving” are the same thing? They certainly don’t sound the same. I can draw water from a well without giving it to anyone. In fact, it seems like I’d have to do one before I could do the other.

Maybe they’re the same in the Greek? No, I checked and they are definitely two different words (didomi vs. oudeis) – and even in Greek different words certainly might mean different things. If this is the case, then treating the two terms as equivalent would be to commit another popular fallacy known as equivocation.

Now, it must be admitted that these terms seem to share the same context and thus their equivalency is not out of the question. Even granting this, however, consider the very next verse after White’s proof text. It says,

“It is written in the prophets, ‘And they shall all be taught by God.’ Every one who has heard and learned from the Father comes to me.” (John 6:45)

What if someone argued that being “taught” is equivalent to being “drawn”? The near context and explanatory tone would seem to make such an equivalency as much or even more likely than words used way back in John 6:37. In that case, the verse would be teaching that all people would hear and learn from the Father, come to Jesus Christ, and be saved! White would not agree to such an equivalency, of course, because it would not fit his theology.

But wait! Maybe that’s not a fair comparison because “being taught” and “hearing and learning” are not necessarily the same thing! You could have one without the other!

It is perfectly consistent with John 6:37-44 to believe that God the Father draws all people, but only gives some to Christ the Son (resulting in their salvation). That may not be Calvinistic, but it is scriptural. Only theological bias appears to tip the scales one way or the other. Thus, despite White’s posturing, he truly fails the logic on this one.

Now, everyone makes mistakes, and it would be unduly triumphalistic to make a huge deal out of one little misinterpreted verse. This problem, however, is a big one for James White. For one thing, this passage is one of White’s go-to prooftexts for his brand of Calvinism, so his misreading of it is especially damaging to his case.

More importantly, though, this particular failure is troubling because the mistake White makes should be obvious to anyone who has even dabbled in introductory logic. While White often demonstrates an impressive ability to cite various sources and Greek lexicons, those are just data – and data uninterpreted is useless. Worse, data misinterpreted can be seriously misleading. Given the number of times White has been shown this particular error, it is deeply concerning that he retains his interpretation and continues to make the same argument for it.

What does such a failure say about the rest of his theological reasoning ability?