After numerous faculty and alumni from Southern Evangelical Seminary became Catholic, the school finally offered a class on Roman Catholicism being taught by Norman Geisler at Southern Evangelical Seminary. Given that so many of his associates and students have become Catholic over the years (including the co-author of his latest book on the subject!), this was not a big surprise. What caught my eye, though, was the tagline that said the class would be “comparing and contrasting it with orthodox Christianity.”

I’ve critiqued Geisler’s attempts at grounding orthodoxy before (here and here), and I doubt that anyone would say that Geisler’s quasi-Thomistic, pseudo-Calvinist, Dispensational, Fundamentalist Baptist doctrinal collage is the measure for orthodox Christianity, but that’s kind of how it often comes across when he is involved.

The statement reminded me of another terminological issue I have with Dr. Geisler and many of the projects with which he is involved either directly or indirectly. Here, my issue is not with the truth or falsity of Geisler’s doctrine, but rather his claim that it represents “the historic Christian faith.”

Geisler’s equation of his beliefs with “the historic Christian faith” is evident from several of the institutions with which he is involved or has substantially influenced. For example, two seminaries and one academic society that Geisler is associated with share the same basic mission and doctrinal statements. I know from personal experience that their wording (and, more importantly, their interpretation of those words) match Geisler’s.

Here is a representative statement from Southern Evangelical Seminary (SES) where the claim is made no less than three times on one page:

The second is from Veritas Evangelical Seminary (VES):

Finally, the same sentiment is reflected in the purpose statement of the International Society of Christian Apologetics (ISCA), an academic society Geisler founded:

Note that in all three cases above, the institutes assert that they are defending “the historic Christian faith.” The third qualifies the  phrase as being equivalent to the institution’s own beliefs, as does that of Ratio Christi (an organization started at SES after Geisler left, but which was started by his students):

The famous line from The Princess Bride that forms the heading for this section is more than appropriate here. The use of “the” and “historic” in this phrase implies that (1) there is only one Christian faith, and that (2) it is reflected in Christian history. Given this understanding, Geisler’s continued insistence that he and the institutes associated with him defend the historic Christian faith flies in the face of the facts.

This can be seen by comparing the various doctrinal statements of the above institutions with the actual faith of the historic Church. Since Jesus Christ founded the Church about 2,000 years ago, one would expect that “the historic Christian faith” would at least reflect the majority views of that 2,000 year period. Instead, what we consistently find in “Geislerian” doctrinal statements is a post-Reformation / Baptist view.

The SES doctrinal statement, for example, contains numerous doctrines that only came into popularity during (blue) or after (purple) the Reformation; others are as late as the 19th or 20th centuries (red), and some are merely choices from among several historic options (yellow):

The VES doctrinal statement includes plenty to ensure that only Protestants – perhaps only Baptists / Evangelicals – can enroll (highlighted):

Or consider the more minimalist doctrinal statement of the ISCA. Although it was adopted to allow a wide range of Christian scholars to participate, it clearly was meant to exclude non-Protestants (highlighted):

The idea that this doctrinal statement (as understood by ISCA) can be equated with “the historic Christian faith” is amplified in ISCA’s Bylaws:

Not only are these beliefs clearly post-Reformation in origin, it actually reflects 21st Century thought – for whatever the doctrinal statement actually says, it must be understood as the ISCA framers meant it. Ironically, the protestant ISCA Framers require a doctrinal “magisterium” in case anyone dissents from the statement as they mean it (which reflects the argumentative strategy Geisler often uses in his attack on the beliefs of others, e.g., members of ETS and scholars like Michael Licona). Yet the need for a “magisterium” is used by Geisler to attack Catholicism! (A lesser but also interesting irony is that the 2014 ISCA president Don Williams is an internationally recognized expert on the likes of G. K. Chesterton, C. S. Lewis, and J. R. R. Tolkien – none of whom ISCA would accept as members!)

Likewise, the doctrinal statement of the Ratio Christi directors (who judge the theological fitness of its leadership) seems to be identical with the above Evangelical distinctives: 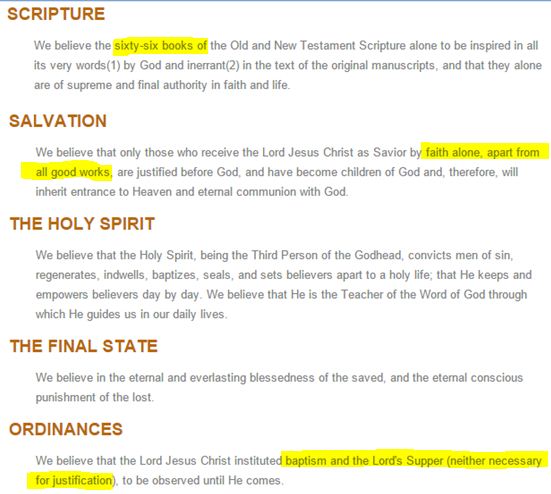 The issue here is not whether Geisler or the institutions connected to him are wrong in their doctrinal statements. Nor is it that they do not have the right to use such statements to weed out those they do not wish to have as part of their organization. Rather, it is that they claim to defend the historic faith of a 2,000 year old Church while including late doctrinal innovations in their doctrinal statements. To do so when their unique views are clearly in the minority (both historically and presently) seems misleading.

While it has been argued by members of these organizations that the historic Christian faith that is being defended and the particular doctrinal statements they adhere to do not necessarily equate, I doubt they would say the same thing if, say, a Mormon organization arose making the same claims.