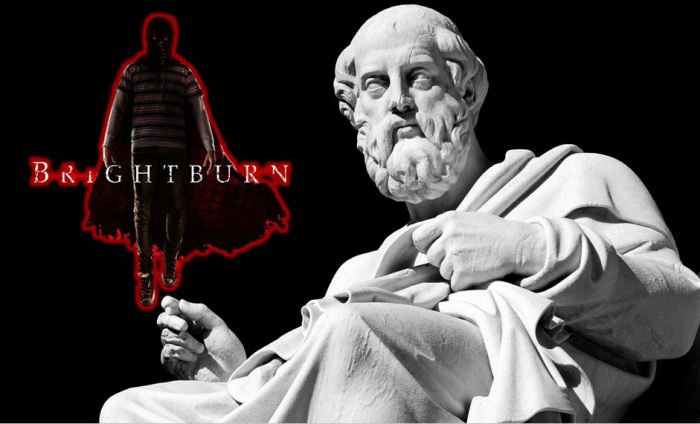 The 2019 film Brightburn poses an interesting question: What would happen if an alien being crash landed in rural Iowa as a baby, was adopted by human parents, and eventually discovered he had superhuman powers?

Now this premise should not sound original to nearly anyone in Western civilization for the last 80 years or so since Action Comics released its first Superman comic book. Brightburn, however, went a completely different direction after this setup. Instead of getting Kal-El – the paragon of human excellence and virtue, we get Brandon Breyer – a heartless 12 year old sociopath who uses his superior abilities to viciously murder anyone who displeases him (including his loving parents).

It’s a terrifying proposal, but one well worth exploring. Indeed, it is one that has been explored since the early days of Western philosophy. Unfortunately, the film fails to treat the subject with the depth it deserves (or, as we shall see, even realistically), opting instead to rush through a disconnected series of sentimental–yet–superficial snapshots apparently reserving screen time for its gratuitous and horrific depictions of Brandon’s murder spree. Not only does the films first act fail to make the connections required to form an empathetic bond with the audience, it fails to support the villain’s actions in the second act. Seemingly overnight, Brandon (“Baby Boy”) Breyers goes from a straight–A student and beloved adopted child to a malicious bully, then creepy stalker, and finally a grisly serial killer. No satisfactory explanation or resolution is ever given.

Although Brightburn earned scores of negative reviews for this narrative misstep (and others), such an unforeseen and jolting character transition might be thought to make sense given certain views of human nature. Superhero altruism was a kind of default expectation in the culture that gave rise to early comic history. While two world wars might have eradicated post–Enlightenment idealism concerning innate human virtue, the line separating the good guys from the bad guys still managed to hold. Those who have come of age exposed to post–modern skepticism regarding everything from metaphysics to morality are more at home in the gray areas, though. More recent comic fans might well ask, “Why wouldn’t someone with superpowers use them for selfish gain?” Some might go even further and say that the “Superman Scenario” is actually unlikely or unrealistic.

Why wouldn’t someone with superpowers use them for selfish gain?

While such attitudes can be attributed to the pessimistic reflexes of contemporary culture, they are not limited to it. Similar thinking can be found in important strands of the Western intellectual tradition as well. Theologically it can be found in the influence of the 16th Century Protestant reformers Martin Luther and John Calvin. Now common amongst Protestant thinkers today is their belief in Total Depravity – the doctrine that when humankind fell into sin through the actions of Adam and Eve, every aspect of human nature (intellect, will, body, etc.) was corrupted.[1] As Luther put it, man “lost his freedom, and is forced to serve sin, and cannot will good,” and therefore, “sins and wills evil necessarily.”[2] Clearly, one holding to such a view of humanity would have no trouble believing that a super–human would simply be super–evil. In fact, it could hardly be otherwise.

However, it was neither Martin Luther nor John Calvin that came up with the idea that humans are innately evil. Plato recorded similar thinking (with which he disagrees) through the character of Glaucon in The Republic. During a discussion of human action and motivation, Glaucon presents Socrates with a well–known story meant to illustrate the view that self–interest alone guides human action. The story, often referred to as The Ring of Gyges, tells of a common shepherd who finds a magical ring that allows the wearer to become invisible.[3] Upon discovering the ring’s power, the shepherd uses this ability to kill the king, steal his wife, and take his place as ruler of the land and husband to the widowed queen.

Glaucon goes on to say that the shepherd did what anyone would do if they could get away with it. So–called “good” actions actually flow from the same selfish motives as bad acts – they are simply being expressed in a society where acts of selfishness are often punished to maintain order. Given a context where one’s self–interests could be fully realized without penalty, one would actually be considered foolish not to act selfishly.[4]  The ring’s power was not corruptive – it merely gave the wearer the ability to get away with what all people naturally desire.[5] Plato spends the majority of The Republic laying out his response to Glaucon, asserting that it is one’s knowledge of the Good that will truly fulfill human longing and that justice is its own reward.

It was Plato’s protégé Aristotle who elucidated and expanded moral philosophy to such a brilliant extent that it was adopted by the foremost Christian theologian – St. Thomas Aquinas – over a millennium later. Following Aristotle, Aquinas taught that humans are rational animals (embodied beings possessing both intellect and will) who thus long to know truth and attain goodness. Those who consistently act according to the higher goods develop strengthening virtues in related areas of action. Thus, we remain attracted to truth and goodness unless through years of practice our intellects and wills become so misguided that we become vicious (the opposite of virtuous).

Neither base human desires nor original sin guarantee an immoral outcome in situations of unfettered freedom.

What Plato, Aristotle, and Aquinas would agree upon, then, is that neither base human desires nor original sin guarantee an immoral outcome in situations of unfettered freedom. Although human nature is damaged throughout, the Good persists and remains both knowable and desirable to all (although it is often confused for lesser goods).

While neither the question the film asks nor the answer it gives are original to the history of philosophy or theology,[6] Brightburn could have been a trenchant thought experiment or an engaging parable.[7] Unfortunately, the movie’s attempt to undermine the popular assumptions of the superhero genre fell flat. Its failure to deliver a satisfactory origin story with sufficient explanatory power caused it to lack believability, and its project was therefore unsuccessful.

Even audiences lacking in philosophical or theological training instinctively recognize that people (“rational animals”– whether human or alien) do not simply turn to evil just because they can get away with it. Nor is this simply a matter of cultural expectations: the same fans who did not question Superman’s virtue were unsurprised at Admiral Zod’s villainy.[8] Neither nature nor nurture guarantee moral outcomes for free creatures, and power–as–such is no different.

[1] Michael Horton puts it this way: “Our fall was complete. Every area of human life was affected, and nothing created by God was left untouched. Consequently, the stain of sin corrupts us physically, emotionally, psychologically, mentally, morally, and spiritually.” (Putting Amazing Back into Grace, Baker Books: 2011, 47).

[3] Republic Book II 359d-360c. Glaucon himself is borrowing from a tale already several centuries old in his time (Herodotus reports that Gyges was a 7th Century B.C. king of Lydia).

[5] Contrast this to Tolkien’s ring of power in The Lord of the Rings (films: 2001-2003). This easy comparison is often made, but also often mischaracterized. Although both rings gave the wearer the superficial power of invisibility, the One Ring’s true power consisted in its property of corruption (both physical and moral). Thus, the loci of evil in the two stories are exactly opposite. A closer analog to Glaucon’s story is found in H. G. Wells, The Invisible Man (film: 1933).

[7] Several interesting discussions of these very issues can be found in Tom Morris and Matt Morris (eds.) Superheroes and Philosophy: Truth, Justice, and the Socratic Way (Open Court, 2005).

[8] General Zod was also from Superman’s home planet of Krypton and so possessed the same superpowers.