On October 5th the Jehovah’s Witnesses Watchtower Society announced that a revised New World Translation was being foisted upon the world. This “Silver Sword” is the first revision in nearly 30 years. “The 1961, 1981 and 1984 editions were more of updates than revisions. But the 2013 edition changes a considerable number of renderings from the 1984 edition, and its purpose has been altered from being exacting to being useful in the ministry.”*

Several word choice changes were made as well, but more interesting for orthodox Christians are the verses that the Watchtower distorted to avoid the clear biblical teaching that Jesus Christ is God incarnate. The primary victims are John 1 and 8, Colossians 1, and Hebrews 1 (see Jesus In the Hands of the New World Translation for why they are problematic). To keep commentary brief I will say that basically nothing has changed in the John and Hebrews passages – same old, same old.

John 1 still inconsistently translates the same word for “God” as “a god” or “god” when referencing Jesus:

John 8:58 is still translated “I have been” to avoid the clear reference to Exodus 3:14 (which Jesus’ Jewish audience clearly understood): 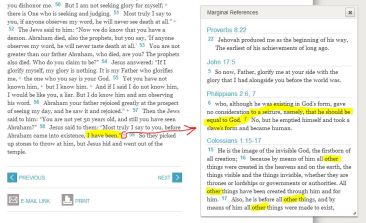 Hebrews 1 still inconsistently translates “worship” as “obeisance” and “LORD” instead of “Jehovah” with reference to Jesus (and his throne is still, somehow, God):

The book of Colossians, though, went through a shocking revision (not so much shocking for its dishonesty, but for its historically infamous dishonesty). Besides the “torture stake” they insist was the original “cross” (cf. John 19:6 in the 1984 and 2013 editions), the NWT editors returned to their initial error in the original edition by adding the word “other” in several places to Colossians 1 without indicating the addition by use of brackets: 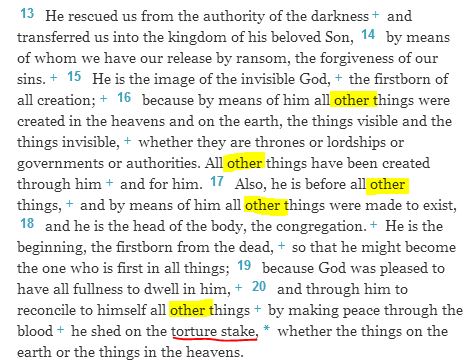 One JW apologist had this to say about the removal of brackets: “they produced the edition without brackets, which I appreciated in that it took away the questions about those bracketed portions. . . . I think it establishes an important point in regard to the organization’s critics: whether you go on the left side or the right, or straight down the middle, or backwards, they don’t care, because they’ll find fault with how your shoe laces are tied, and if there were nothing they could twist, they would make it up. (In fact, they still do anyway.)” Apparently accurate Bible translation is pointless if its critics won’t be satisfied either way.

Well, at least we critics aren’t “mentally diseased” for pointing this out any more (1 Timothy 6:3-4). So we have that going for us, which is nice.

I was glad to see that the Watchtower continues to miss the verse in Revelation 5 that says ALL creation WORSHIPS Jesus:

The failed prophetic year of 1914 makes its reappearance as well – apparently 100 years is a “short time” on Watchtower computation (one wonders how many of the 144,000 could possibly be left, though):

As near as I can tell the revised NWT (RNWT?) poses no more threats to orthodox Christianity than previous versions have, with the exception of the removal of the brackets around the words “other” in Colossians 1. But knowing this ahead of time is actually an advantage to the trained apologist. For it is telling that the Jehovah’s Witnesses must distort the biblical text to shoehorn in their heretical doctrines.