Becoming Catholic meant learning about Catholic Bibles, and when it was time for my first born to have his own, I did some extensive shopping for a children’s Bible. I settled on The Catholic Children’s Bible from St. Mary’s Press, and have enjoyed it for years.  When he outgrew it and gifted it to his younger siblings, I began searching for a repalcement. The same publisher also had a Bible for middle-schoolers called Breakthrough! The Bible for Young Catholics. I thought I’d take a look.

Like the The Catholic Children’s Bible, St. Mary’s Breakthrough! Bible is very colorful and has a lot of great navigation aides and helpful mini-articles dealing with theology, prayer, and life.

My first concern was that it was the NABRE translation, which means it had the same critical notes they all do. The good news is that they are relegated to user un-friendly end notes instead of being included on each page. That made me glad – if they have to include those notes, at least kids won’t likely read them!

(There is also a Good News Translation version, but it’s unattractive
and suffers from the same problem detailed below.)

Unfortunately, that gladness was only temporary. The NABRE notes might not be as in-your-face in this Bible as others, but the same spirit has infected the Breakthrough! articles as well.

Right away, young readers are told that Moses didn’t write Genesis (or any other book in the Pentateuch), that the creations stories are neither literal nor scientific (even though the Church teaches that both are licit interpretations – see CCC 283-286). They are told that the death penalty nearly always must be avoided (although the Church has held to its admissibility for 2,000 years). Apparently when God speaks in the Old Testament, He’s only being literal when he sides with modern liberal theologians.

The Old Testament prophetic books are treated in a similar critical fashion. Isaiah didn’t write the Book of Isaiah, and of course Daniel wasn’t written by Daniel but some contemporary of late second temple Judaism (otherwise Daniel might have predicted the future!). 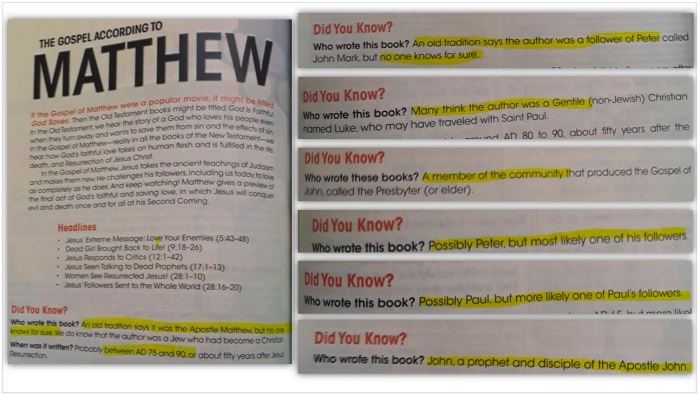 The New Testament fares no better. According to the Breakthrough! probably none of the Gospels were written by the apostles. We’re apparently not sure who wrote most of the epistles either. From Matthew to Revelation doubt is cast on who wrote anything.

As with the NABRE notes themselves, the only scholarly opinions presented by the Breakthrough! Bible are those rooted in liberal Protestant higher criticism. These do nothing but undermine confidence in Scripture. Regardless of what else Breakthrough! might offer, it  isn’t worth telling impressionable kids who likely have little to no background in biblical criticism that the first eleven chapters of Genesis (i.e., most of the Bible stories they know) didn’t really happen and we have no idea who even wrote the most important books in the Bible.