One of the biggest issues with Sola Scriptura (the idea that the Bible alone is the ultimate authority for faith and morals) is that the Bible nowhere says that it alone functions as the ultimate authority for faith and morals (or anything else). This makes Sola Scriptura an authoritative extra-biblical tradition (the very thing it was supposed to rule out). Recognizing that direct biblical support for Sola Scriptura is not to be found, Protestants have usually tried to find biblical justification for the doctrine by arguing indirectly from other passages (which is a legitimate method).

There is one verse, however, that sometimes gets trotted out as a definitive biblical statement of Sola Scriptura. It is an infinitive phrase tucked into a sentence in 1 Corinthians 4:6 – “I have applied all these things to myself and Apollos for your benefit, brothers, that you may learn by us not to go beyond what is written, that none of you may be puffed up in favor of one against another.” (NOTE: As far as I know, only the NIV translates the phrase in question as “Do not go beyond what is written.”) If there is a single proof text for Sola Scriptura, this is it.

It is not, however, very often that one finds this verse cited for the purpose of defending Sola Scriptura. I could find nothing from Luther on it and Calvin did not use it to do so. This is not necessarily a big deal, but it does show that this – the only verse that even vaguely sounds like a direct assertion of Sola Scriptura – was not behind the original Reformers creation of the doctrine. This does not mean that no one has cited 1 Corinthians 4:6 as proof of Sola Scriptura of course (or else this article would be arguing against a straw man!). One notable Reformed thinker, Greg Bahnsen, had this to say:

“In I Corinthians 4:6, we have what amounts to a virtual declaration of the Protestant doctrine or principle of Sola Scriptura! . . . Isn’t that amazing? Here’s Paul (long before Luther, long before Calvin, long before the controversy in the late 20th century) saying, I want you to learn the meaning of this, “Not to go beyond the things which are written!” . . . It is very simply the Protestant principle of sola Scriptura.”

“What is certain is that all that is necessary is in Scripture–and we are forbidden “to exceed what is written” (1 Cor. 4:6).”

Evangelical writers Norman Geisler and Ralph MacKenzie caution their readers that “the Bible constantly warns us ‘not to go beyond what is written’ (1 Cor. 4:6)” (Roman Catholics and Evangelicals: Agreements and Differences, p.187 and footnote 27).

The idea that 1 Corinthians 4:6 definitively proves Sola Scriptura is more popular on internet blogs and websites. For example Matt Slick of the Reformed website CARM says, “The Bible clearly tells us that it is the standard of truth.  We are not to exceed what the Scriptures say. . . . (1 Cor. 4:6).”

One webpage boldly proclaims that “1 Cor 4:6 so clearly refutes the Roman Catholic and Orthodox church’s doctrine of oral tradition, they do not know what to do with it!”  Which is weird, because Catholic apologist Robert Sungenis spends 25 pages discussing it in his book Not By Scripture Alone, and there’s, like, a whole paragraph on it in the Catholic Study Bible: 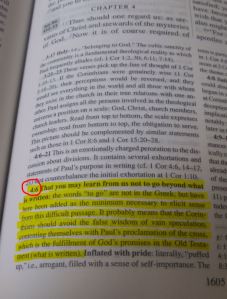 In any case, even if it were true that Catholics “do not know what to do with” 1 Corinthians 4:6, it is certainly no better for Protestants. The first major issue with using 1 Corinthians 4:6 as a clear proof of Sola Scriptura is that many prominent Protestant thinkers did not see it as such. Here are several:

Some Protestants have seen in 1 Corinthians 4:6 a command to simply limit one’s judgment of ministers to the ways ministers are described earlier in his letter: servants (3:5; 4:1), farmers and fellow workers (3:6-9), wise master builders, (3:9-12, faithful stewards of God’s mysteries (4:1-2), spectacles to angels and to men (4:9), fools for Christ’s sake (4:10), fathers (4:14-15). Still others have considered 1 Corinthians 4:6 to be Paul’s citation of an non-biblical maxim as he does elsewhere in the letter (e.g., 1 Cor. 6:12-15) – hence the quotation marks in the NIV rendering. Others see it as an idiom meaning “follow the rules” (see NEB or TEV translations). Yet another view is that Paul is referring to names written in the Lamb’s Book of Life (cf. Rev. 20:12) given his the final judgment context of the previous sentence. Finally, some believe the verse to have been added to Paul’s original letter by later scribes.

As I will argue below, whatever else the phrase might mean, it seems to fall far short of being a clear proof text for Sola Scriptura.

Paul does not mention “scripture” or “the Bible” in this passage. So on a purely literal reading, to not go beyond “what is written” would seem to apply to anything that is not written down – scripture or not. No one takes this view, of course, as the results of doing so would be absurd. Further, the context of Paul’s writings reveals that he almost certainly did not mean the command to apply to just anything. Every time Paul uses the Greek word translated “written” here, he is referring to the Old Testament. This might save us from the absurdity of not believing anything until it is on paper, but limiting it to the Old Testament would mean that 1 Corinthians 4:6 did not apply to itself since it is not in the Old Testament (neither, in fact, is most of the New Testament!).

Now, while generalizing “what is written” to include both the Old and New Testament writings would avoid the above incoherency, it would be contrary to Paul’s command to “stand fast and hold firm to the traditions that you were taught, either by an oral statement or by a letter of ours” (2 Thess. 2:15).This verse seems to support anti-sola-scriptura every bit as clearly as 1 Corinthians 4:6 appears (on the surface) to be pro-sola-scriptura. Moreover, this is not the only verse to do so. Paul praises the Corinthians for holding to the traditions just as he had handed them on to them before he wrote 1 Corinthians (i.e., orally – 1 Cor. 11:2) just as he commands the Thessalonians to do concerning the oral teachings he gave them (1 Thess. 2:13 cf. 2 Thess. 3:6).  A similar issue arises when we realize that in 1 Cor. 5:9-11 Paul speaks of a prior letter he wrote to the Corinthians that he expected to be taken authoritatively – yet this letter is lost and not part of Scripture.

Moreover, the idea that everything an apostle taught orally was eventually reduced to writing is itself an extra-biblical idea. And what of the apostles who never wrote any Scripture? Jesus commands the apostles to “preach,” not write, and only three apostles wrote. What about Jesus himself who left behind no writing – nor any command to write? Matthew 28:20 says that the apostles were to “observe all I have commanded,” but we are told that not all Jesus did and said is in Scripture (Jn. 20:30 and 21:25)! And what of apostolic teachings that seem to have never been written down? The apostle John said, “I have much to write to you, but I do not wish to write with pen and ink. Instead, I hope to see you soon when we can talk face to face” (3 Jn. 13). Paul said likewise in 1 Thess. 3:10. Paul “proclaimed the entire plan of God” in Ephesus for over at least two years (Acts 20:27), yet his letter to them is only 5 short chapters. What else might he have taught them? In 1 Corinthians  itself (11:34) Paul says he has more to teach them but he would do it when he arrived – but we are never told what “these other things” were (and have another lost letter in between 1 and 2 Corinthians that probably contained such material if any of his letters did – 2 Cor. 2:4 cf. 7:8).

Further, the apostles themselves taught from sources outside the Bible. In Acts 17:28, Paul quotes the writings of a pagan poet. In Acts 7:53 Stephen cites an oral tradition that angels gave Moses the Law – one which Paul also taught in Galatians 3:19.  Jude 9 and 14-15 both contain material concerning the archangel Michael and Enoch which is taken from extra-biblical sources. In Ephesians 5:14 Paul seems to quote some authoritative source as saying, “Wake up, sleeper, rise from the dead, and Christ will shine on you” –  but this is found nowhere else in the Bible. Matthew goes beyond “what is written” in the Old Testament when he lists prophetic evidence of Jesus (2:23). Jesus Himself quotes a pagan playwright when he blinded Paul on the road to Damascus (Acts 26:14).

That this small phrase from 1 Corinthians 4:6 is a difficult text to nail down is indicated by its numerous interpretations (both Protestant and Catholic). Further, the phrase in question is only part of a sentence, which is itself part of a larger chapter written in the context of a rather long letter. None of these additional contextual layers imply Sola Scriptura. Thus, if these seven words are taken to do so, it would seem that Sola Scriptura was suddenly introduced with no warning in a minor clause of a single sentence in one of the New Testament’s longest writings and never brought up again. Finally, if 1 Corinthians 4:6 is taken as indicating that oral traditions are not authoritative, it would be contrary to numerous other passages and practices of the apostles and the early Church (even threatening confidence in Christian orthodoxy and the canon of Scripture itself).

The main theme and primary concern of First Corinthians is clearly that of unity. The problem was that the immature Corinthians were dividing over the very things that should unite them. In this opening section of the letter, Paul is addressing disunity caused by unbiblical assessments of ministers. Given the textual connection between Paul and Apollos in verses 1:12, 3:4, 3:22 and 4:6, along with his mention of “numerous guides” both in 1:10 and 4:14, plus the material in between devoted to judgment (a theme leading right up to 4:6), it seems best to me to take “not go beyond that which is written” to be referring to the proper biblical standards of ministerial judgment (whether this includes the whole Bible, just the Old Testament, or just Paul’s words in the letter). This explanation fits with the context of the letter in a way that Sola Scriptura would not.

Thus, it seems that the best contestant for a Sola Scriptura proof text in the Bible actually offers little in the way of support. Much as Jeremiah 10:2-4 sounds like (and has been used as) a clear condemnation of the tradition of decorating Christmas trees, its significance dissolves once one looks below the surface.