In another post, I detailed some of the more egregious theological errors being supported by the the Jehovah’s Witnesses mistranslation of the Bible (the New World Translation, or NWT). Those are issues that should concern all Christians. There are others, however, of special interest to Catholics that are less well-known and rarely discussed. Some of these are more direct and important than others. Some are obvious, others subtle. Some probably get missed because they are a holdover from the Jehovah’s Witnesses’ origins that are reflected in other Christian sects today. This post details a few I have noticed.

The anti-Catholicism of Jehovah’s Witnesses is easily seen in their publications (e.g., Mankind’s Search for God,ch. 11), and that bias is certainly behind some of the NWT’s mistranslations. However, just as the NWT is inconsistent in its attempt to rid the Bible of proof texts for Jesus’ deity, the NWT missed some good opportunities for anti-Catholicism (for example, paradosis – the Greek word for “tradition” – is translated correctly in 2 Thess 2:15 and 3:6 unlike the NIV which changes it to “teaching” whenever paradosis is used positively). Of course, some of the NWT’s mistakes might have been made unintentionally and simply reflect the anti-Catholic context in which the Watchtower Society (the governing body of the Jehovah’s Witnesses) operates. In any case, mistranslation is mistranslation – and anyone with a high view of the Bible should not accept it.

{Note: I reference the New World Translation using website images below for easy navigation, but the paper version is available as an e-doc HERE.}

Boasting in the “Torture Stake” 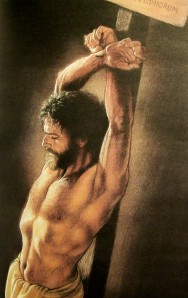 Jehovah’s Witnesses also deny the cross. While ancient sources confirm the accuracy of Church tradition, the Witnesses claim that Jesus did not die on a cross, but rather a “torture stake.”

This teaching is seen in the NWT which translates the word for “cross’ (stauros) as “torture stake.”

Now, in the Gospel of John it is reported that nails (plural) were used in Jesus’ hands,

but this is not Jehovah’s Witnesses picture the crucifixion:

As to the claim that there is no evidence for understanding the Greek stauros as “cross”, this is simply false. In Martin Hengel’s Crucifixion in the Ancient World and the Folly of the Message of the Cross there are half a page of references supporting the idea. As to the Greek language, Greek lexicons confirm that the shape of a stauros varied, so at best the word could mean either cross or stake – and in that case the solid tradition of the Church should be determinative.

There is also the additional fact that Jehovah’s Witnesses have to cite sources out of context (a practice that is not at all unusual) to make their position appear scholarly. Compare their apologetics book Reasoning from the Scripture with its selective quoting of The Imperial Bible Dictionary here:

There is also unusual biblical evidence for the traditional cross. A staurogram made of a ligature (a “double character”consisting of two or more letters) from the tau and rho in the Greek word for “cross” (ΣTAΥPOΣ) was  used to abbreviate the Greek word for cross / crucifixion in very early New Testament manuscripts.

It is also interesting that in the Book of Revelation, people are said to receive either the mark of God or the mark of the beast (Rev. 7 cf. 13). This idea which echoes Ezekiel 9:3-5 which reads:

“Then the Lord called to the man clothed in linen who had the writing kit at his side and said to him, ‘Go throughout the city of Jerusalem and put a mark on the foreheads of those who grieve and lament over all the detestable things that are done in it.’ As I listened, he said to the others, ‘Follow him through the city and kill, without showing pity or compassion.'”

Now, the word for “mark” in Hebrew is tav, and the Greek letter for “T” is tau. Coincidence?

Other than being another attack on Christian tradition, one wonders why this is even an issue. But my guess would be that the sign of the cross has historically been made with reference to the Trinity.

This “Means” My Body

Only Jehovah’s Witnesses who are members of “the 144,000” are allowed to receive communion (the “Lord’s Evening Meal” or the “Memorial”) when it is served (which is rare). This is not a huge problem for them, though, because the Jehovah’s Witnesses are also taught that the Communion meal (the “Lord’s Supper”) is only a symbol of Jesus’ body and blood (contra John 6:51-55). Although there are dozens of ways a symbolic statement could have been indicated (e.g., “this means,” “represents,” or “signifies”), Jesus used none of them when he instituted the Lord’s Supper. This symbolic view is, however, supported by a few mistranslations of Jesus’ words in the NWT (mistranslations one can easily see by simply comparing them to the Witnesses’s own Kingdom interlinear Translation)

Note also that the NWT replaces the phrase “in (en) my blood” in 1 Corinthians11:25 with “by virtue of my blood” and it replaces “of (tou) the body and blood”  with “respecting the body and blood.” At least the NWT did not mistranslate the warnings potentially associated with these errors.

That They May Be “In Union With”

Jehovah’s Witnesses are quick to point out that the true faith will unite its members and that division is a sign of apostasy. For example, in their book Mankind’s Search for God, the Witnesses point out that, 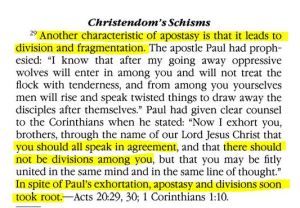 The most obvious problem with this claim is that the Watchtower organization did not come into being until the 19th Century (along with several other groups). A more accurate chart than the one pictured above would be: 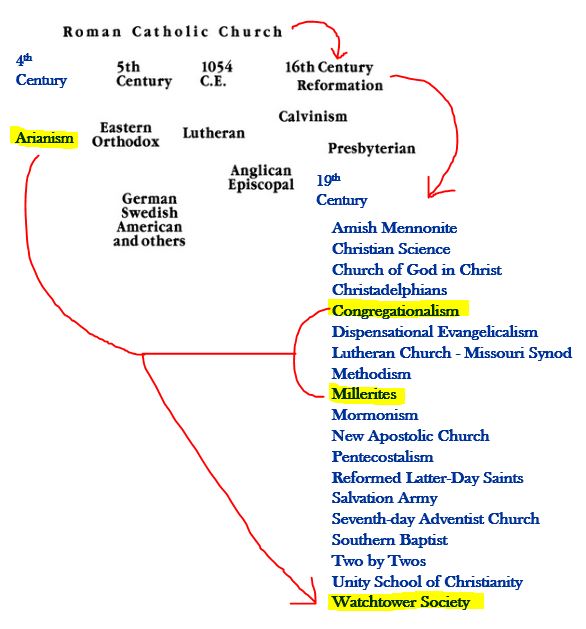 To justify this historical fact, the Witnesses have to rely on the typical “apostasy narrative” common to all sects that claim to represent the original Church (the falsity of which I discuss HERE). But the unity of the Church is not simply based on current agreement, it also must be in unity with the original Church. This is reflected in Jesus’ prayer to the Father for Christian unity – which he bases on his own unity with the Father. This is the “consubstantiality” which Christians affirm in the Nicene Creed, but which the Jehovah’s Witnesses deny. Perhaps this is the reason behind their inconsistent translation of “be one” (hina osin) in the NWT:

By inconsistently translating and placing “be one” as parallel with “in union with,” a distinction can be maintained between the two without necessarily introducing disunity. This clever trick means that one can claim non-identity and unity at the same time. 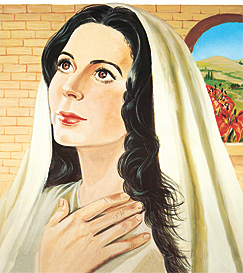 Each part of the “Hail Mary” prayer is based on verses from the Bible (e.g., Luke ch. 1:28-44 and James 5:26), but readers of the NWT might not notice it. Here is how the first sentence of the prayer would sound if read in the Jehovah’s Witnesses translation:

The first problem is that “favored” here (ἐχαρίτωσεν) is lexically connected to God’s grace (the root word χαριτόω means to “receive grace” – e.g., Eph. 1:6). Mary is “highly favored” because she was receptive to God’s grace. This is not necessarily a major translation error, but it may be another example of the NWT using any possible translation to not sound like traditional Christian teachings. (In fairness, the rest of the “Hail Mary” verses appear undistorted.)

Second, using the (alleged) name of God (“Jehovah”) here for the Greek word “Lord” (kurios) has absolutely zero textual support. This is not a surprise, as it is this error that Jehovah’s Witnesses use to justify the existence of the NWT (and of course, with the Jehovah’s Witnesses’ denial of Jesus’ deity, calling Mary “Mother of God” is definitely not going to fly. 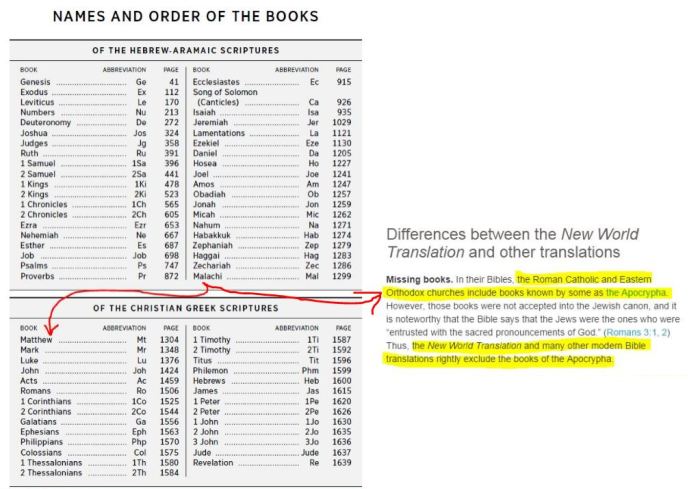 Like the Protestant sects that birthed their movement, Jehovah’s Witnesses reject the Deuterocanonical books of the Old Testament. I defend the Deuterocaninicals elsewhere – the point here is simply to acknowledge that anti-Catholicism is found right from the first pages of the NWT.

Like it does with the orthodox doctrines like Jesus’ Deity or the reality of Hell, the Jehovah’s Witnesses’ New World Translation of the Bible regularly skews to their particular theology. By use of both inconsistent literalism and frequent departure from a word-for-word translation, the NWT often reflects the theological bias of the Jehovah’s Witness Watchtower organization rather than the actual text. This is not exactly unusual in Bible translation, nor is it always the case with the NWT. But given the claims of the NWT to be free from such “sectarian religious coloration” (the description of the Jehovah’s Witnesses NWT interlinear Bible), this is unacceptable.